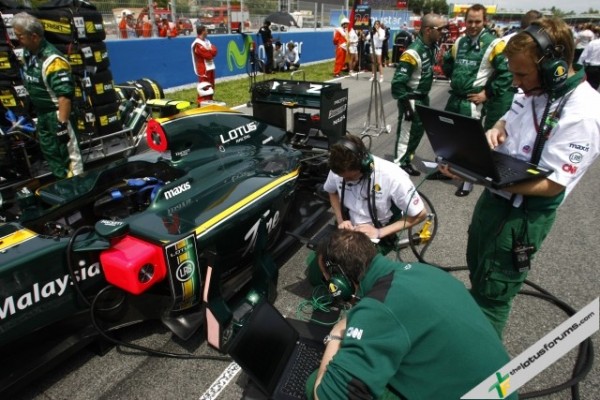 Lotus Racing has enjoyed a successful first day of testing at Jerez with driver Fairuz Fauzy completing 76 laps without problems, and completing the 300 kms needed to gain his Super Licence, subject to FIA approval.

The team was among the first cars on track in wet conditions, and, despite a lack of power steering, due to supplier issues, Fairuz successfully fulfilled all his and the team’s objectives for the day.

Mike Gascoyne, Chief Technical Officer, said “It’s been an excellent day for the whole team. Firstly I want to say a big thank you to Fairuz who did an excellent job today with the first proper day of running. With so much going on, such as doing systems checks, it can be a pretty disjointed day for the driver. When you add into that the changeable conditions, and also the fact we were running without power steering today, it could have been a tricky day for Fairuz but he didn’t put a foot wrong so well done to him and a big thank you.

“With the car we had no major reliability issues – a few niggles with overheating which were quickly solved and then the car ran pretty faultlessly. The power steering issue will be fixed for tomorrow so all in all a very successful first day and a busy evening ahead preparing the car for tomorrow.”

Fairuz Fauzy was also delighted with his first day behind the wheel of the Lotus Cosworth T127, saying “First of all I want to thank the team. To arrive here and complete 76 laps is fantastic. It was a big challenge, both to complete the 300kms I need for the Super Licence, and with no power steering it was difficult to drive in the dry, not so bad in the wet, so I was driving a bit conservatively but I am just very pleased.”

Finland’s Heikki Kovalainen takes over driving duties for the next two days (Thursday and Friday) before Jarno Trulli joins the action on Saturday.