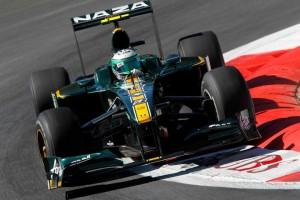 Race day in Monza will be a year to the day since Lotus Racing received confirmation of their entry to the 2010 FIA Formula One™ World Championship. The team’s performance in today’s Free Practice sessions showed how far the team have come throughout the season, and reinforced their position at the head of the new teams. A good day’s work on track and in the garage saw Jarno Trulli on home turf finish in 19th, and Heikki Kovalainen 20th.

Jarno Trulli (Chassis T127-04) FP1: 12 laps, best time 1.26.898, 19th / FP2: 38 laps, best time 1.26.204, 19th “First of all it’s great to be back home for the first time with Lotus Racing. We’ve had a fantastic reception here, and even though Monza hasn’t been particularly lucky for me, it felt great to be out on track today. We started with a problem early on in FP1, but the guys did a great job in a very short time to change the parts which weren’t working properly. They put the car back together fast enough to give me some track time in the first session, so thanks to them for that. In FP2 we got through the whole programme – we were mainly looking at tyre evaluation and setup work, so having completed that it’s been a positive day. Obviously we’d like to pull away a bit more from the guys behind us, and I think with some more work tonight we’ll be looking good for tomorrow and Sunday.”

Heikki Kovalainen (Chassis T127-01) FP1: 14 laps, best time 1.27.374, 20th / FP2: 41 laps, best time 1.26.306, 20th “It was a pretty good day. We had a bit of an issue this morning, but were able to identify the problem quickly and we only lost a bit of time. This afternoon everything went to plan – we had no issues at all and the car feels good on both low and high fuel loads. It obviously moves around a bit more in the low downforce settings, but it’s the same for everyone and I think our top speed’s where it should be so I think we’re looking pretty good for the whole weekend.”

Jody Egginton, Chief Race Engineer: “Excellent job by the guys all day, particularly this morning. We did the installation laps and then decided to make a couple of precautionary changes which meant both crews had to work hard to make sure we could get some track time. They did a great job and turned both cars around, which meant we pretty much completed both Jarno and Heikki’s programmes in the morning. In FP2 we completed a lot of laps, put a lot of kilometres on the tyres and tried a couple of setup changes. We’ve got a lot of data to go through tonight, but we’re pretty satisfied with where we are. There’s obviously a bit of cat and mouse going on between us and our nearest rivals with wing levels and fuel loads, but we think we’re where we should be, and that means it’s been a pretty good day.”

Tony Fernandes, Team Principal: “It’s really good to be back with the team after a few races where I’ve been watching away from the track. We started out with a bit of pressure, having to make some changes early on in the session, but that’s what we’re about – trying something and not being afraid to do so. This afternoon we ran a good number of laps and generated a lot of useful data, and as both drivers were happy with the car it’s been a good day. It’s a good day to come back – sitting on the pitwall it suddenly clicked for me that we’re one year on since we received the letter from Max confirming our entry. We’ve talked about it a lot, but it’s real – we’re now 14 races into the Lotus Racing story, and we’re here to stay.”

D’Ambrosio in for Grosjean at Monza