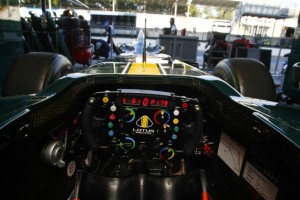 Lotus Racing moves back to Asia where the unique night race in Singapore marks the 15th round of the 2010 FIA Formula One™ World Championship. For the Anglo-Malaysian squad, the event will be another opportunity to cement their status as best of the new teams on-track, and will provide the perfect backdrop for a number of very exciting announcements about the team’s future for 2011 and beyond.

Mike Gascoyne, Lotus Racing Chief Technical Officer: “Looking back to Italy it was obviously not the outcome we wanted in the race, particularly after such a good weekend until that point, but Jarno’s pace was very encouraging, particularly in the race, and Heikki put in a good performance to finish 18th. Now we move on to Singapore where we will be looking to get both cars over the finish line and reinforce our position in front of the new teams. The focus now is really on the 2011 car, so we won’t be bringing any major new parts to Singapore. Despite that, I think we’ll be able to maintain the advantage we have over our nearest rivals on what is a pretty high downforce track. The track is bumpy and some of the kerbs are pretty high, so being able to deal with the bumps and the kerbs well is important. Both our drivers have reported that they feel like the car deals well with uneven surfaces, and they have the confidence to attack the kerbs in the T127, so let’s see what happens.”

Heikki Kovalainen: “It’s always slightly different racing in Singapore, but it’s something I look forward to. The race organisers always do a great job in preparing the track, and it’s pretty hardcore for the fans as the cars look cool and sound amazing around the city streets. The race itself is pretty tough on the cars and the drivers, but we make sure our body clocks stay on European time and as long as we sleep well and stick to our normal schedules, we cope with it fine.

“Before the race I’ll be doing some intensive training over the next week and a half to make sure I’m ready for the remaining flyaway races. It’s important to make sure I have enough in reserve, not just for Singapore, but for what lies ahead in Japan, Korea, Brazil and Abu Dhabi.”

Jarno Trulli: “I’m staying in Italy after the race and will be doing a bit of cycling with some friends in Tuscany – it’s good to relax a bit between races and catch up with friends, and combining that with a bit of training is a good way to prepare for the next race. I really like the challenge of racing in Singapore – as a driver it’s good to push yourself and while the track itself isn’t hugely different from a couple of others on the calendar, the fact that it’s a night race makes it a unique event. It’ll be good to give the fans in Singapore, so close to Malaysia, their first chance to see the car on track, so we’re all looking forward to it. In terms of preparation for the race, there isn’t a huge amount you can do – we use a clear visor to maximise visibility in the twilight conditions, but apart from making sure your body stays on European time, it’s pretty much the same as any other race – train hard for the heat and make sure you’re ready.”

Tony Fernandes, Team Principal: “Singapore is going to be amazing, for me and the whole team – we’ll be making a couple of very exciting announcements over the race weekend, so it’ll be good for us on and off track. Fairuz is driving in FP1 and it’s always good to see a young Malaysian competing on a global level, particualrly for Lotus Raicng. On a purely visual level it will be very cool to see our cars under the lights, and I think that green and yellow paint scheme, with the white flashes running along the cars, will look amazing on track – it’s something the fans will love. They also need to keep an eye on the skies, as the pictures of one of our AirAsia planes in Lotus Racing colours have appeared on the internet. I was sent a few pictures of it by Twitter, and while that is obviously very cool, it means even more to me that that plane will be taking the team back home to Malaysia after the race, and that they will be taking a bit of time off between Singapore and Japan in our other home. It is great to know they can land on the other side of the world from the UK and be given the sort of welcome they will receive in Malaysia, where Lotus Racing has really touched the heart strings of a huge amount of Malaysian fans.

“Singapore itself is obviously somewhere that is very close to my heart – I know a lot of people there, and I have had a lot of emails from friends and colleagues who are very excited about seeing us on track, so I can’t wait. Singapore is where we first announced the formation of Lotus Racing, standing there in black polo shirts and black caps. Mike had brought some parts with him to show Dr Tun Mahathir and now we have gone from that small beginning, with just a few parts and a very big dream, to where we are today, and long may that dream continue. ”

3rd for Kimi the comeback king in Singapore GP