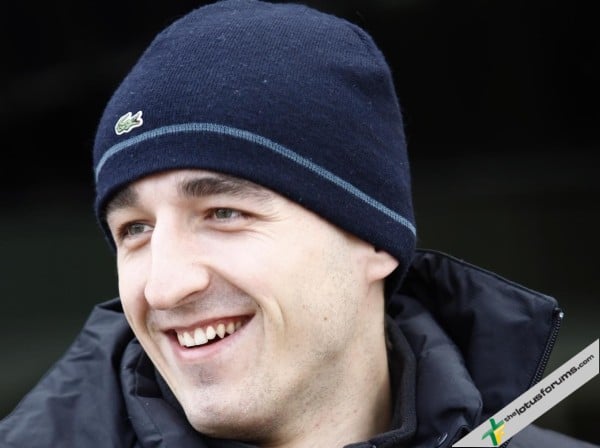 Robert Kubica has today informed Lotus Renault GP that, despite having started an intensive training programme, it is still too early for him to commit to driving in the 2012 championship. Robert’s progress remains impressive – he can now walk freely, and move his hand and elbow -, but he feels that he needs more time to return to full fitness.

Lotus Renault GP remains committed to helping Robert as much as possible in his recovery process. A test car is ready and waiting for him, and a dedicated crew is on stand-by. Of course, Robert will remain a member of the LRGP family in 2012 and he is already, through his management, holding talks about renewing his contract for the following season.
Although very disappointed by the news, Lotus Renault GP will start assessing its options and will evaluate the most suitable candidate to drive from the first 2012 winter testing session. Once again, all the members of Lotus Renault GP wish Robert a full and speedy recovery as we say: “Szybkiego powrotu do zdrowia” – Get well soon our friend.

Robert Kubica: “Even if I’ve been working very, very hard over the course of the last few weeks, I came to the conclusion that I am not yet certain to be ready for the 2012 season. I have called the team and I have informed them of the situation. This was a difficult decision to make, but it is the most reasonable one. I also know that LRGP need to prepare for next year, and further extending deadlines would not have been the right thing to do. On a personal level, my recovery is still very encouraging and my doctors keep being impressed. I just need more time, as I want to be 100% ready before I commit to anything driving related. Finally, I regret not having been able to provide more news and not having appeared in the papers, and I thank my friends of the media for understanding that this has been the best way for me to cope with what has been the most difficult period of my life.”

Eric Boullier, Managing Director and Team Principal: “Everybody in the team is, of course, very disappointed today. Robert not driving in Australia at the start of next season is not what we were all hoping for. However, he has taken a very mature decision, acting in the best interests of Lotus Renault GP. As a team and as a family, we remain 100% behind him and we’ll help as much as we can. A programme composed of simulator testing, single-seater and F1 track time is awaiting him. In the meantime, we will start talking to a few drivers in order to finalise our line-up for next year as soon as possible. Robert will take it step by step and will jump back in his racing car when he feels it is the right moment to do so. On behalf of all 520 members of the team, I wish him a speedy recovery.”