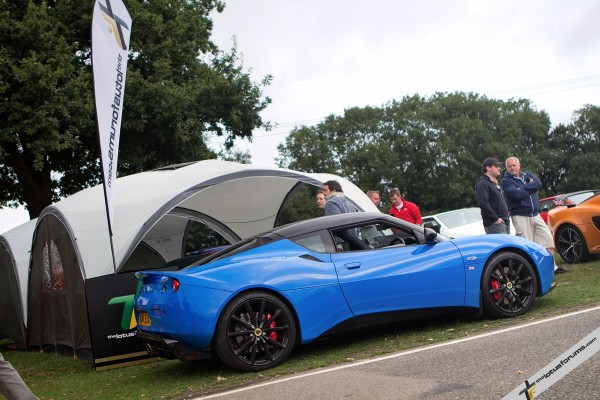 The Sports Racer is the evolution of the Evora offering a fully specced car with all options ticked at a ‘package price’. Our test car is presented in Daytona Blue which is a real eye catcher and indeed attention grabbing colour with black detailing on the roof and under door sills, front splitter and rear diffuser to mark it out from the normal Evora. It is also fitted with gloss black 19″ and 20″ wheels with red calipers which finish off the car nicely and black ‘Lotus’ and ‘Evora S’ badges on its rear end. Sports Racer’s come in this colour and also 6 other colours including the new offerings of Solar Yellow and Pewter Grey.

The last Evora we drove in our 12 month ‘Long Term Test‘ was an MY12 S IPS with all options and many of the updates as noted in this article from the time.  I think the main differences that have been made to the car since then are really focussed on quality. Quality of materials, quality of assembly and quality of finish. The car now feels, well, just well put together as you’d expect from a car at this price point. A recent trip out with a 991 GT3 owner cemented this with his comments being that he was amazed how Lotus had upped their game with the car and that he was surprised at how nice it was, for a Lotus. Those age old Lotus acronyms really are a thing of the past now, this car is a pleasure to be sat in and to drive.

This Evora is now a couple of thousand miles in and it’s now memorable how much attention it receives. Maybe it’s the colour which does stand out but after the official handover of this car to TLF from Lotus UK Territory Manager Scott Walker at the Lotus Festival, a short drive home had kids on bikes giving me the thumbs up and a ‘nice car mister’ (always a great barometer of coolness!) and a group of bikers chase me down to ask about the car and listen to the engine note as we had a ‘rev-off’! There are quite a few occasions when parked up there will be people either up close and looking through the window or surveying from afar. You know they’re looking and when passing groups on the pavement, you’ll also see them watch you pass if you glance in the mirror, it quite literally is a head-turner.

What I’d forgotten from the last outings in the MY12 car was how complimentary the Evora is to the driver when ‘pushing on’. You really can enjoy the performance with the car doing most of the work and as a driver it pushes your performance envelope beyond what you may have previously enjoyed. The IPS has also seen some updates to the software that runs the gearchange and most noticeable are the very fast upchanges (we believe to be 60ms) which, while no DSG change are quick enough to be almost not be there. The auto-blip on downchange now seems to match the engine speed much better. It’s a real joy to accelerate hard and blip up through the gears with the paddles and there’s a satisfying ‘crack’ from the exhaust as it moves up through the change. This coupled with a more vocal supercharger which emits that lovely whine under load adds to the feeling that you’re in a proper sports car and a fast one at that.

I’ve managed a few long drives and fuel economy now seems better than remembered from the previous Supercharged Evoras. A trip from mid-Kent to the coast of Norfolk saw an average of 28MPG displayed on the dash readout which seems reasonable for a 345BHP 3.5l Supercharged V6 and makes the car more economical for touring. The ‘miles remaining’ display on the dash is over optimistic though – when filling the 60l tank the display maxes out at 345 miles to go and remains like this for the first 50-ish miles however when it catches up it does so with a vengeance. In reality, a tank will last for around 300 miles with normal driving and when being a little more enthusiastic the car will need to be refilled after 220-240 miles. This gives an evonomy of between 18 and 22MPG with those ranges. This doesn’t account for the fact we refill when the light comes on, not when the engine cuts out from a lack of fuel so those are conservative figures.

That trip to Norfolk was on the motorway and dual-carriageway through some roadworks (which seem to be taking their time, imagine!). The return journey was a more interesting route through Suffolk, the route being Helmingham to Eye to Stradbroke to Heveningham to Halesworth to Beccles. This was a great journey and gave me the chance to have a real workout, for the car and me! The roads between the towns were the quintessential collection of English A and B roads which meant some nice, well sighted straights and tricky, well and more often adversely cambered corners with a surface that you’d not be playing billiards on. In my opinion, this is the sort of drive which really shows the Evora for what it is, the car’s gracefulness over these types of roads standing out. Other cars would be sizing up which bush to throw you into but the Evora laps up the bumps, giving you what you need to know about the grip levels and surface but keeping to itself the trauma the suspension is dealing with for you. It really was the case that I would have liked to turn around and drive it again, this time just a little bit faster knowing the car will have more to give, even if I didn’t!

There have been a couple of issues so far. The first is that the alarm had a moment (well, a couple of days) of madness and would go off by itself for no reason. This seems to have passed but it’s an issue that is well documented and will be covered by the warranty. It happens when you unlock the car and relock it without starting and the alarm doesn’t fully reset and the workaround is to just cycle the ignition on and off when the car is open, this resets the alarm fully. Another issue was that the Evora ABS and DPM don’t like rolling roads! There are 2 main types of rolling road and the one we tried is the one the Evora doesn’t get on with, clipping the power output down to 285BHP as the front wheels were stationary and the rear wheels were doing 150MPH! The solution to this is to either pull a bunch of fuses (not ideal!) or to find a rolling road with powered front rollers, the easier solution as the sensors on the wheels will react normally with them all spinning at the same speed! This problem was evident on other manufacturer’s cars on the day; the Evora isn’t unique with this and you can imagine the car’s software thinks you are doing the mother of all wheelspins and wants to protect itself from your errant ways!

It’s worth noting that the Launch Edition Evora came with a woeful Alpine/Blackbird infotainment system which really was hard work. This then changed to a better Alpine, then a very good Pioneer and is now back to Alpine again. This new system is great, it just works. The bluetooth is always connecting, calls are clear and easy even on the motorway (with adjustable mic and speaker volumes through an in-call menu) and it sounds good. Even the satnav works nicely, giving you traffic diversions if required and a nice contoured map display. Perhaps a larger nick in the glovebox for the USB cable to slot through would be nice, I fear it will pinch the cable but it is big enough, I’m being picky now but I just make sure that it’s my cable that extends out to the phone, easy and cheap to replace if needed!

We’ve got the Evora for another couple of months and hopefully more of you will get the chance to see it out and about at many TLF events. So far it was lucky enough to be on the posh lawns of Syon House for the inimitable Salon Prive with Lotus dealer Bell and Colvill and also on show at the Goodwood Revival with our friends from RSR Spa. If you see it about, come and say hello and have a look around, we’re happy to take any Lotus fans out for a drive too so you get an idea where the now 5 year old Evora line has made it to.

On loan to RSR Spa in their livery

On loan to RSR Spa in their livery

The Sports Racer is only available in the EU and in the UK is priced at £68,850 in S IPS guise following this year’s price increase from Lotus. You get the Sports and Tech pack and 2+2 seating included and at the moment if you order a new one there’s 3 years servicing and a 3 year warranty included. The 0% APR 50/50 finance plan is also being very well taken up so it’s a good time to buy one.

[PICS] Lotus at the 2013 London MotorExpo