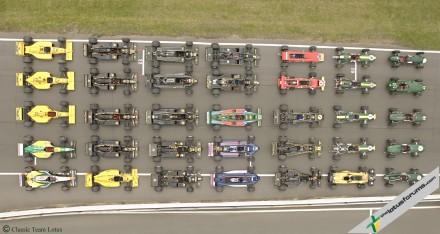 On 20th June 2010 at the Classic Team Lotus Festival at Snetterton, thanks to the generous participation of owners from all over the world, one of every type of Team Lotus Formula One car was gathered together for the first time. This special occasion was captured by daredevil photographer, William Taylor, from 34 metres up on a hydraulic platform, positioned directly above the centre of the grid. Classic Team Lotus is creating 491 numbered prints of this unique image for sale (image dimensions 610×325, print dimensions 700 x 500).
79 will be signed by Hazel Chapman and Clive Chapman, and numbered in accordance with the Grand Prix victories, and priced at £225. 412 will be signed by Clive Chapman and Chris Dinnage, the Classic Team Lotus Team Manager, and priced at £125. Despatch is to commence by the end of July. These highest quality Giclée prints will be unframed and despatched in a large diameter, bespoke tube. If you would like to order one of these prints of this special moment in Team Lotus history, please go to www.classicteamlotus.co.uk
Between them these 35 cars represented the Lotus marque at 491 Grand Prix, from the 1958 Monaco Grand Prix to the 1994 Australian Grand Prix, scoring 79 World Championship Grand Prix victories, won by Stirling Moss (4), Innes Ireland (1), Jim Clark (25), Graham Hill (4), Jo Siffert (1), Jochen Rindt (6), Emerson Fittipaldi (9), Ronnie Peterson (9), Gunnar Nilsson (1), Mario Andretti (11), Elio De Angelis (2) and Ayrton Senna (6). Team Lotus won the World Championship of Constructors in 1963, 1965, 1968, 1970, 1972, 1973 and 1978 and the World Championship of Drivers was won six times by Team Lotus Works drivers Jim Clark (1963 & 1965), Graham Hill (1968), Jochen Rindt (1970), Emerson Fittipaldi (1972) and Mario Andretti (1978).
Want Lotus news updates in your inbox? (It’s Free)
Leave your comment below...