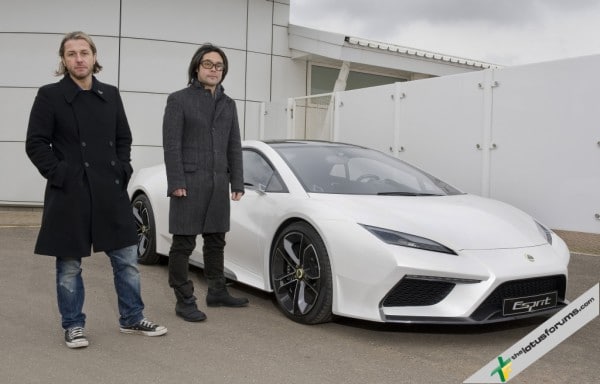 Lead singer and guitarist Grant Nicholas and bass player Taka Hirose were treated to a day which any car enthusiast would enjoy starting some time with Gino Rosato, Director of Corporate Operations then an up close and personal look at the latest generation of Lotus cars including the Esprit which they had a chance to sit in and enjoy. Next was a visit to the newly rebuilt test track where Grant and Taka were the first non-Lotus staff members to get the opportunity to drive on the track with the surface only being completed the day previously. The South Circuit is a loop which was previously the location of the runway when Hethel was a USAF base in WWII and is built to FIA standards and approval and they could stretch the legs and explore the performance of the Evora S, the new supercharged 350ps Evora. First driven by a Lotus test driver, Grant and Taka then were allowed to take control of the car to see if they could replicate the accurate drifting and high performance driving under the guidance of their instructor. Both enjoyed the car, it’s performance and handling and the thrill of high speed driving in a safe and controlled environment and going sideways really fast, just what a rock star needs the day after a gig!

Next was a visit to the production facilities to see the Elise and Evora production lines and what goes into making these cars from the first piece to the last. James Haskey, UK Sales Manager for Lotus showed the band and their production crew all aspects of the production on the hand operated lines from the bonded aluminium chassis through to the paint shop where each car is hand sprayed before final assembly, inspection and testing. In the final inspection area were a couple of 2Eleven track cars which grabbed everyone’s attention, Grant and Taka seeming to take a shine to one each!

Classic Team Lotus are very conveniently location over the road from the Lotus factory and Clive Chapman, son of Lotus founder Colin Chapman was on hand to show the band how his company are involved in keeping the classic F1 cars running and racing. Taka has been a life long fan of the JPS liveried Lotus F1 cars so was pleased to see Elio De Angelis’s race winning Type 91 and Emerson Fittipaldi’s Type 72 currently on site as Clive explained how his fathers innovations help shape the cars into the winners and hugely successful icons of racing that they have become. There were several other significant cars including the first carbon monocoque F1 car and a car Jim Clark raced and won in so a great experience to be able to see and experience these cars so freely. At the end of the tour Clive pulled out a Feeder gig ticket for Grant and Taka to sign, turns out he’s a big fan!

The band headed back to Cambridge where they are playing at The Junction as part of this tour, more details and tickets are available from their website. You can find out more about Group Lotus and Classic Team Lotus on their websites.

Lotus Cars News June 11, 2020
Lotus Aftersales are delighted to announce that the Lotus Sports Car Project Department has been working in collaboration with AiM Technologies to develop a...