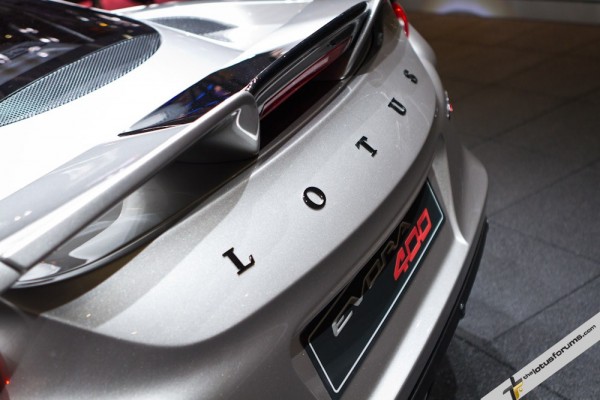 The introduction of the Lotus Evora 400, as a 2017 North American Model Year, marks the start of a fresh period in Lotus’ presence in this vital market. The previous model Evora already received positive acclaim from media, customers and dealers alike and reaffirmed Lotus as the maker of some of the finest, purest, most lightweight and most efficient sports cars sold today.

“The Lotus Evora 400 combines high performance with the legendary Lotus benchmark handling. It is lighter, more efficient and dynamically better than ever. It is the perfect high performance machine for those discerning buyers seeking a hand built British-built sports car that possesses a purer driving experience, greater agility and a more involving drive.”

In addition, and in the most significant change in Lotus’ presence in the USA for many years, Lotus Cars USA. Inc, (LCU), based currently in Lawrenceville, Georgia, will co-locate to Lotus Engineering. Inc, (LEI) in Ann Arbor, Michigan, the heart of the US motor industry. This will ensure that both divisions can grow their individual operations while benefiting from improved efficiency through sharing a number of business functions. This co-location is expected to be completed by the end of July 2015.

“North America, as the largest sports car market in the world, is important for Lotus, both for model sales and for our engineering consultancy business. By having both of our USAorganisations located in Michigan, we shall be within the heartland of the USA automotive sector, where the headquarters of some of the most important, influential and significant automotive manufacturers and suppliers are based. This will reaffirm our presence in the North American market, by providing improved customer service, better technical and consultancy support, while ensuring that we have access to a skills base not found anywhere else in the territory. All of this fits with Lotus developing speedily in North America in years to come.”

The Lotus Evora 400, unveiled at the Geneva Show in March 2015, has already generated excitement worldwide. With 400 hp, an acceleration to 60 mph in 4.1 seconds and a maximum speed of 186mph, the Lotus Evora 400 is six seconds quicker around the company’s Hethel test track than the previous Evora S.