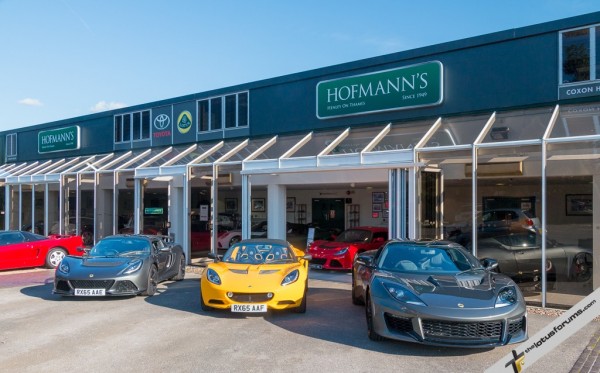 Hofmanns of Henley have a reputation for knowing their way around a sports car! Managing Director Chris Randall is well known in Lotus racing circles for his high speed in his fully race prepared Europa which he now takes into many other race series and knows only how to win! Now, Lotus have appointed them as a Main Dealer and we’d like to welcome them to the Lotus world officially.

Scott Walker, Lotus Cars UK Sales Manager, commented,”We are delighted to welcome Hofmanns of Henley to the Lotus Dealer Network. Hofmanns have an excellent facility for Lotus, specialising in the preparation and the maintenance of sports and classic cars, and have a terrific reputation for race car preparation which has seen multiple successes on the track.  There is a real passion and understanding for our product within this dealership, and there’s now a great platform for customers within the South Oxfordshire area for the supply of Lotus cars, and the support of Lotus owners.”

We visited their Henley on Thames showroom and workshop recently and had a chance to look around and meet the key people involved. With a well sized and well-appointed showroom and huge workshops Hofmanns are an ideal partner for Lotus and can offer every facility from your first car to race prep to the highest levels of Club Motorsport. Chris gave us some background on the company and his involvement with the marque which has been a lifelong passion.

“I am trained as a product designer but ended up running a serviced office business before selling out to take over Hofmann’s.  I’ve been car crazy all my life with a particular interest in Lotus cars.  My father was car mad too and owned a number of Elan’s when he was young then two Esprit’s and a Lotus Carlton whilst I was in my formative years.  My first experience racing Lotus’ was with an S1 Elise in the Britcar championship which raced very successfully in the first Britcar 24 hour race at Silverstone.  Following that I raced with the team championship winning works Lotus Cadena Team in British GT then went to LoTRDC which I won in my S1 Exige, then S1 Elise before building my Current Lotus Europa which has been race winning in LoTRDC, GT Cup and CSCC.  I’ve also jumped in various other Lotus’ over the years including a stint in the Motionsport Elise S2, winning the Britcar production championship.  Currently I’m still racing the Europa in the CSCC ’New Millenium’ series (it’s won every race entered this year) along with a lovely Elan 26R, build by Hofmann’s, which we are currently preparing for the Spa 6 hour race.  I took over Hofmann’s of Henley in 2007 when it was a small local business specialising in Vintage cars.  Since then I have expanded the company to specialise in all prestigious British marques, both modern and classic.  4 years ago we took over the local Toyota aftersales franchise, moved into their modern premises and started up a now successful car sales department from our new showroom.  Since then we have been appointed to represent Proteus cars globally (a product which is actually now assembled in-house) and also Lynx cars who have enormous heritage with the Jaguar brand.  The racing success we have had with Lotus naturally led to becoming a recognised name within the community and now in 2015 we have become a main agent for them.”

The main point of contact for Lotus sales will be Pat Tarry who recently joined the company from Nitron Racing Systems where he was involved in their spring and damper build room for many years so he knows a thing or two about Lotus OEM dampers!

“I’ve been with Hofmanns full time for a couple of months but been involved in the Lotus world for several years beforehand. I worked for Nitron in the automotive build room and dealt with all car related customs, setups etc. Through Nitron I got to know Chris, who at the time needed a hand at weekends running race cars. I’ve worked with Chris all over Europe for the last 2 years and at Spa this year got offered the Lotus job at Hofmanns! Despite the fact I sit behind a desk all day I am one of those rare sales guys happy with a spanner in my hand as well. Aside from work I am a semi retired athlete (ok fully retired!) and love a good trackday/car meet!”

We’re sure the company will be very successful and if you’d like to get in touch their details are: