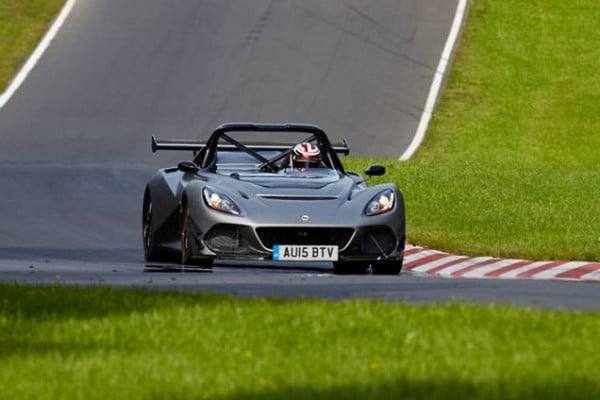 Marking the anniversary of its landmark lap times when testing at the Nürburgring Nordschleife, two new videos of the Lotus 3-Eleven in full flight have been released, allowing enthusiasts to experience the car’s visceral, white-knuckle ride around the “Green Hell” for themselves.

Offering never-seen-before views, the 60 second videos provide a car’s eye view of the fascinatingtrack, as it’s piloted by Nordschleife expert and professional racer Marc Basseng, during its Nürburgring testing and development programme.

The videos not only show the car’s blistering straight-line speed, but also how fast and composed it is when cornering, thanks it to its advanced aerodynamics. At 150 mph (240 km/h) the Road version produces 150 kg of downforce, while Race version with its twin front canards and adjustable rear wing produces 215 kg.

Since the car’s appearance at the Nürburgring, deliveries of the hypercar-humbling Lotus have begun with the first lucky owners finding out what this road-legal racer is truly capable of. Speaking about the car’s Nordschleife debut, Jean-Marc Gales, Chief Executive Officer, Group Lotus plc said, “The 3-Eleven’s time on the track gave us the perfect opportunity to demonstrate its phenomenal pace. It’s the fastest, most focused production road car to ever leave the Lotus factory, and remains true to our values of intelligent and efficient engineering. However, you don’t need to be a professional racing driver in order to tap its potential, and it will embarrass so-called hypercars with six-figure price tags. It remains the perfect template for how we will approach the design of all Lotus sports cars in the future”

The videos also show how driver Marc Basseng had to deal with other cars also on the Nordschleife circuit during the evening public sessions. In what was its first turn of a wheel outside of Lotus’ Hethel HQ, Marc was one of three different drivers helping to develop the car – each one with individual areas of expertise and focussing on aerodynamics, engine calibration, chassis tuning and suspension geometry.

The Lotus 3-Eleven is the most powerful road car to wear a Lotus badge and Hethel’s quickest ever road car. It joins the ranks of those rare cars that can reach 60 mph in under three seconds and 100 mph in six seconds. To complement these figures, the Lotus 3-Eleven possesses a purity of the driving experience and the benchmark handling for which all Lotus cars are renowned.