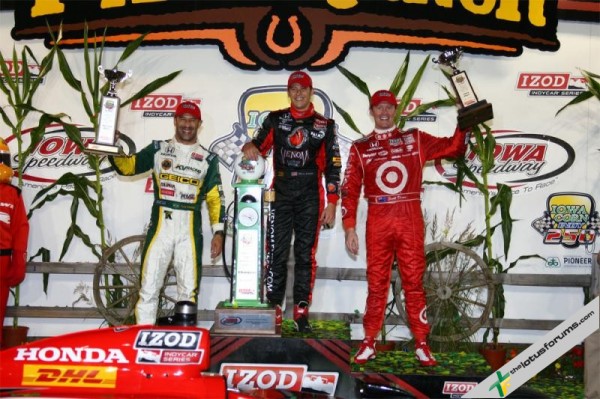 Lotus driver Tony Kanaan finished second tonight in the Iowa Corn Indy 250 on the 875-mile D-shaped Iowa Speedway oval in Newton, Iowa.   Teammate E. J. Viso battled a difficult car and finished 17th while Takuma Sato was having a strong race, but had a late race incident and finished 19th.

Kanaan, No. 82 GEICO- KV Racing Technology – Lotus, the defending Iowa champion, started a season-high third and never ran lower than fourth the entire race.  He took the lead for the first time on lap 203 of the 250 lap competition and held it for five laps.  Dropping into second place he pressured race leader and eventual winner Marco Andretti until resuming the top spot on lap 212, holding it until laps 231 (20 laps for a total of 25), before relinquishing it again to Andretti.  Over the final 19 laps he challenged Andretti trying to force him into an error that never materialized.

‘It was a fun race,” Kanaan said. “These are the kind of races that make it good to be a race car driver – hard fought for us and great for the fans. You always want to win but if you finish second, knowing that you did all you could, fought your hardest, you can’t be upset. This GEICO – KV Racing Technology -Lotus team is definitely heading on the right direction.’

Kanaan has been the strongest of the three KVRT – Lotus drivers this year, especially on ovals. In addition to today’s second place performance he has finished fourth at Indy, 11th in the first race in Texas and fifth in the second and was fighting for a win at Milwaukee, leading 33 laps, before a late race incident ended his day in 19th place.  Kanaan has led a total of 97 laps this season, all on ovals.  In the nine races this year (counting Texas as two races), Kanaan has finished in the top-10 six times with four top-five placements and two podium performances (second here in Iowa and third at St. Petersburg).  He earned 40 points tonight and now sits fifth in the championship race with 211 points and is just three points out of fourth and 19 out of third.

E. J. Viso, No. 59 PDVSA – KV Racing Technology – Lotus, who made his fourth appearance in Iowa, started 19th, the same as he qualified last year when he finished an IndyCar career-high third, but unlike last year, could not advance.  He struggled all night with the car and never got higher than the 17th place, earning 13 points and is now 21st in the standings with 113 points.

“I had such a difficult car that I had to battle so hard through the entire race,” Viso said.  “This is the closest thing to a nightmare.  I am more tired after this race than I have ever been. The car I had this weekend was not my primary car, it was the backup, so we are all glad this weekend is over.  Now we head to some races where we will have our proper equipment and we know that works because we have it in the past.  We just have to keep working as a team.  I want to congratulate Tony on his podium finish.  Once again we showed we are a strong team and getting better with each race.

Sato, No. 5 KV Racing Technology – Lotus, started on the pole, the first of his IZOD IndyCar career and the first time a Japanese driver won an IndyCar pole, and led the first seven laps.  He was never lower than fourth and spent most of his race in second place.  Driving a smart patient race he pressured then leaders, Dario Franchitti and Marco Andretti, and appeared to be a sure bet to finish on the podium.  However, shortly following his third and final pit stop, Sato lost control of the car going over the bump in turn two and hit the wall ending his day. .

“The car got loose going over the bump in turn two and I lost it,” Sao said. “I feel very sorry for the crew, the fans and the sponsors.  Up until then everything was looking good.  I am very disappointed.”

Sato captured his first pole in just his 26th IndyCar start, 13th on an oval and second at Iowa.

Sato made his Iowa debut last year qualifying seventh and running strong, until an incident late in the race ended his day.  The 34-year-old from Japan has shown remarkable improvement on ovals and steadily asserted himself during his second IndyCar season.  He has qualified in the top-11 in seven of the eight events (no qualifying for second Texas race), five times in the top-10 with three top-five starting positions and the one pole.  He has finished in the top-10 four times (fifths at St. Petersburg and Texas, eighths at Milwaukee and Brazil) and led 30 laps (23 in Brazil, his first in the IndyCar Series and seven tonight).  Sato earned 13 points and is now 13th in the championship standings with 155 points. 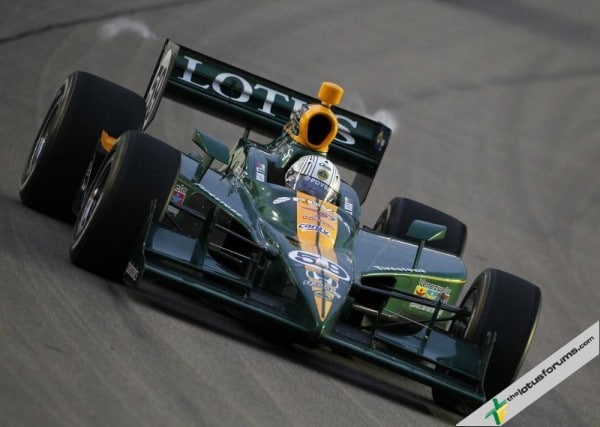 10th place for Sato in Japan

Podium for Kanaan in Indycar