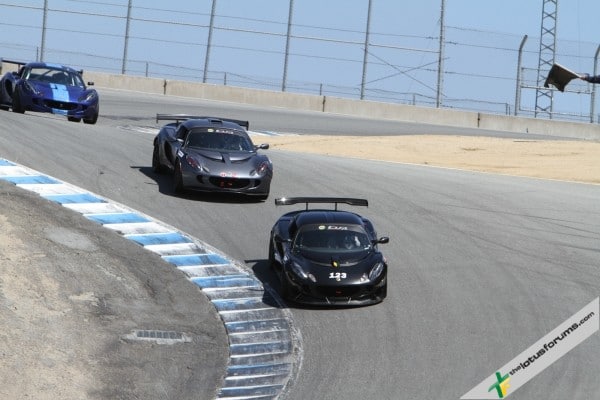 The world famous Mazda Raceway Laguna Seca hosted the largest Lotus Cup USA field to date with over 20 cars attacking the corkscrew on a beautiful weekend in Monterey. Northern California welcomed the Lotus Cup USA championship with open arms as seven new drivers joined the series for the first time. In addition to the racing action, the weekend was filled with activities including an autocross, Lotus Corral and BBQ hosted by the Golden Gate Lotus Club that drew in over 100 Lotus enthusiasts.

A new tradition during Lotus Cup USA race weekends, the racing began on Saturday afternoon with an Australian Pursuit style race where Colin Wall, in his first race weekend, took the victory over Ramon Niebla and Roy Sakioka. A number of drivers “broke out” which allowed Wall to take the victory.

Sunday brought perfect racing weather for Lotus Cup competitors as the sun beamed down on the racetrack with a light ocean breeze to keep the air cool. With over 20 cars, the Time Attack battle heated up in every class. Andy Kern was destined to overcome his bad luck at Laguna Seca from last year and took the overall win and 2-Eleven class victory followed by Robb Bonnano. Donovan Tan in his series debut laid down a lap good enough for third overall and took top honors in the Open class with Joe Finegold coming in second. In Cup, Mike Bryant added another victory to his belt followed closely by Eddie Park and series newcomer and local racer Mike Avila. Peter Mokran took first followed by Colin Wall and Victor Brandt in the hotly contested production class.

The Time Attack set the stage for Round 4’s wheel-to-wheel race with Andy Kern starting from poll once again. However, Kern missed a shift as the green flag flew and dropped back to third by turn two. Robb Bonnano took the lead as Kern got past Mike Bryant to chase down Bonnano. Behind the leaders, the battle heated up between Eddie Park, Peter Mokran, Mike Bryant and Colin Wall. The four pushing hard and staying close together each lap. Mokran made a slight mistake in turn two and went 4-off and had to serve a drive thru penalty. Back up front Kern was able to get past Bonnano for the lead and in the process, Bonnano spun to lose ground on Kern. Park was able to pull away from Bryant and Wall but as the race progressed, the two closed in on Park and their battle heated up. Kern was in cruise control but was slowly being reeled in by Bonnano but was able to hold on for the Overall and 2-Eleven win for the third time this season. Bonnano crossed the line less than a second behind Kern to take second and set the fastest lap with a 1:35.963. It came down to the last corner for Park, Wall and Bryant, as Wall made an inside pass on Park into turn eleven. Wall ran wide as he exited, Park had to over slow to try a re-pass and Bryant set up perfectly for an excellent drive off the corner. They went three wide and drag raced to finish line with Bryant edging Park by a tenth of a second and another tenth back to the underpowered Wall. It was an amazing finish that drew the cheers of the fans throughout the grandstands. Bryant took the Cup class victory followed by Park and Roy Sakioka. In Production, Colin Wall impressed everyone with a solid first place finish followed by Victor Brandt and Peter Mokran.

The Lotus Cup USA championship has reached its mid way point in the season with incredible growth each race, exciting action, amazing sponsorship support and dedicated drivers who enjoy their Lotus cars. Drivers can sign up for future Lotus Cup USA events at lcusa.motorsportreg.com or find more information at www.lotuscupusa.us.