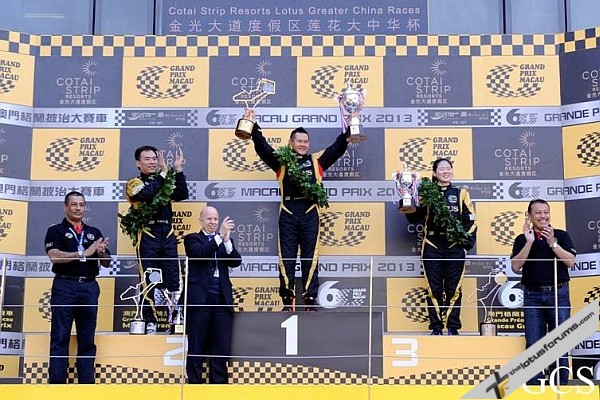 Proving that having fun with your Lotus can really be a family affair, Thai Lotus racers Nattavude Charoensukhawatana and his daughter Tanchanok Charoensukhawatana were celebrating recently after taking P1 and P3 respectively during the Lotus Greater China Race, a Lotus support race for the 60th Anniversary Macau Grand Prix which was officiated by Deputy CEO, PROTON and Director of Lotus Dato’ Lukman Ibrahim.

One of four families competing, Nattavude and Tanchanok demonstrated great spirit showing how the love of Lotus sports cars continues to grow irrespective of one’s age. Indeed, the pair raced amid a grid with a 58-year age difference between the youngest and oldest competitors!

Nattavude stormed to victory taking the flag 1.5 seconds ahead of fellow competitor Ho Hon Keong. Ho had impressed onlookers having had a flying race ascending from the penultimate row of the grid, weaving his way to a P2 finish.

Tanchanok also jostled hard on track, where she led Nattavude from early on. With a snarling pack chasing behind, the race was not without incident. Alain Li, Kevin Chen and James Tang, ran wheel-to-wheel into the corner resulting in a first turn crash and safety car deployment.  Tang rejoined but it was early retirement for Li and Chen.

Nattavude soon took the lead from Tanchanok whilst Wei Chao Yin, and Vincent Chao were also vying for a top spot having taken advantage of the earlier disruption.

With all drivers pushing hard, an ambitious and brave challenge to Tanchanok by the oldest race competitor 77-year old 1964 Macau Grand Prix winner Albert Poon had onlookers cheering in earnest. Poon who displayed impressive form in qualifying, cut across Tanchanok’s path but unfortunately crashed out of the race. This resulted in Tanchanok losing several places with Ho and Wei having slipped up to second and third. Tanchanok, however was not to be deterred and soon regained composure together with the P3 spot.  Wei, Sin and Chao then completed the top six behind her.

Commenting on his fourth win in Macau and his daughter’s podium success, Nattavude said: “Everyone knows Macau is very challenging. I taught my daughter to be careful. In these cars you have to be quite gentle. She learnt well in local races and she has now surprised me!”

19-year-old Tanchanok said: “This was my first time in Macau. I was very excited to be here and it was a good experience for me. I am very surprised to be on the podium. My father is a good teacher!”

The Lotus Greater China Road Race will run throughout China in 2014, is open to all ages and competitors from the Asia region and is supported and run by Richburg Motors. CEO of the Lotus Hong Kong and Singapore dealerships, Eric Wong commented: “It’s great to see so many Lotus Elise Club Racers out in force to support the Macau Grand Prix. The Lotus Greater China Race is a one-make series where all competitors race on equal terms. Its great we have had so many families enter and with an age range of 19-77 years it shows anyone can take part in these competitions and have fun in their Lotus. I am sure it made fantastic TV. I would like to thank all the competitors for taking part in the event, Lotus Cars Ltd, together with our sponsors Cotai Strip Resorts.”

This sentiment was also echoed by Group Lotus COO, Aslam Farikullah who said “The weekend’s racing was truly excellent. We are thrilled so many Lotus racers took part in what marks the beginning of the Lotus Cup Asia series. Lotus Cup continues to grow around the globe, and the newly launched Lotus Cup Asia series announced in Singapore is integral to that.”

The Lotus brand was also strongly represented in the Suncity Group Macau Road Sport Challenge, where two Evoras, an Exige Cup R and 2-Eleven of owners Anthony Chen, William O’Brien, Eric Wong and William Lau also competed. William Lau recovered to take the flag in 9th in a race cut short after an early spin in his Evora GTC.