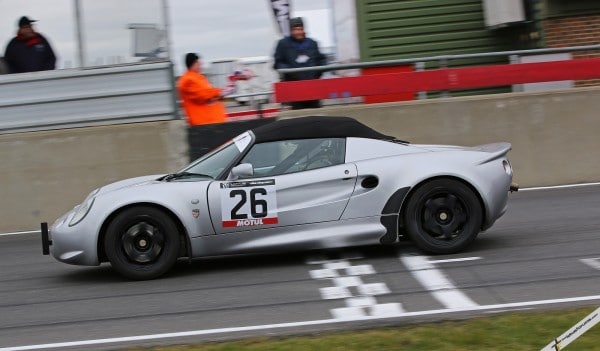 The Lotus Cup UK Speed Championship’s 2016 season got underway on the eve of the spring equinox at Norfolk’s Snetterton circuit on Saturday 19 March.

A last minute regulation change meant that the pack was split into four classes, and with the addition of several newcomers and many returning drivers having made updates and improvements to their cars since last season, there was plenty of speculation on who would be leading each set. Whereas previous sprints at Snetterton covered two-thirds of the 300 circuit, ending at the bridge that marked the end of the Bentley Straight, this time almost all of the 200 circuit would be used from the start line until the exit of the tricky Coram curve. Each driver was given two back-to-back practices, and four timed runs, and everyone adapted well to the additional challenges of the Bomb Hole and Coram corners, which arguably favoured the ex-racers who would potentially push harder in this section.

Fastest driver of the day was Jason Weatherall, taking first place in the new SuperSport Modified class in his Honda-powered Elise. Race experience no doubt helped the other three class winners, with Philip Stratton-Lake taking Production standard in his S2 111S, while Stephen Morrison took Production modified. The SuperSport base class win was taken by Mads Peterson in his Exige V6 Cup, Mads having a busy day taking part in two races alongside his sprinting duties. Several drivers achieved their first podium places, including Adam Ruck, Martin Roberts, and Paul Neale, with James Tubby taking second in SuperSport on his sprinting debut. Best improvement on the day went to Jill Cheshire who knocked off a full 10 seconds between the practice and race times in her Elise Cup R.

Both drivers and spectators enjoyed a thoroughly good day at Snetterton, despite the cold and damp conditions. The next round of the LCUK Speed Championships will be at Hethel, the home of Lotus, on 1 May.