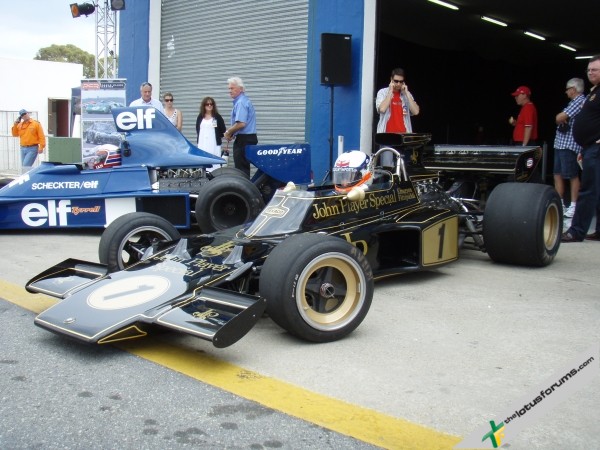 The first Top Gear Festival took place in Kyalami from 17th to 20th March and saw a little piece of history re-enacted when Derek Bell drove a single seater Lotus for the first time since his third place at Silverstone in 1966 racing a Lotus 41.

The car in question was Emerson Fittipaldi’s 1972 World Championship winning Lotus Type 72, which finished 2nd in that years South African Grand Prix. Having had practise in the car cut short on Friday by the weather, Derek finally got the chance to drive the car in anger on the Sunday once the thunder storms had abated, taking to the track with Jody Scheckter in the Ferrari 312, David Coulthard in a modern Red Bull Formula 1 car and a host of other classic Formula 1 cars driven by the Scheckter family.

The enjoyment he gained from the time on track in the Type 72 was evident “To drive the Lotus Type 72 on track at Kyalami was like going out with an old girlfriend, you instinctively knew what to do. To win world championships, you knew that this car had to be outstanding and it was. The Type 72 was so much more than I expected, beautifully prepared and a joy to drive.” going onto to say “It was fantastic to be back on the circuit at Kyalami again. South Africa was traditionally the last round of the world sports car championship, the reception from the fans was always, and still is, superb, they appreciated the racing and that was apparent over the course of the Top Gear Festival, despite the weather.”

To close the symmetry of Lotus Type 72 appearing at the event, the car was run by former Team Lotus mechanic Glenn Waters, whose last visit to Kyalami was in 1975 when Derek’s former sports car team mate Jacky Ickx raced a JPS Lotus Type 72.