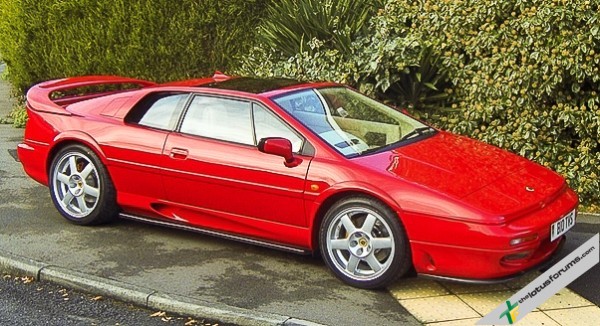 Sometimes you can’t improve on perfection, sometimes there are lots of improvements to be made and in the case of the Esprit time has offered the chance to bring the car up to date and make some changes. Plenty of spare time has given one owner the chance to take those improvements and move them on to the nth degree, as the in the case with Dave Lisle’s Esprit Turbo SE. Dave (CHANGES on the forum) has spent some time and a lot of cash no doubt make improvements to the Esprit to a degree not seen before and we’re showcasing his car in his own words in 3 serialised articles. The first, this one is about the car and the exterior changes he’s made. To follow will be what work has been done to the chassis then how he’s managed to get a very drivable 412bhp out of the 2.2l engine. For now, enjoy!

My name is Dave Lisle , I am a design engineer who has been fortunate enough to have diversified into classic car restoration and classic modernisation.  I built my first classic , an MG when i was 18  and I’m still at it 35 years later… Other than the first MG all the road cars I restored or built have been for customers and with specific restrictions. When I reached 50 I decided to treat myself to a modernised classic without restrictions.  As I already owned an Esprit SE,  this was the obvious choice. I felt it offered great potential for upgrade. I decided to see what could be done to possibly improve an already iconic British super car without losing any of the stylish character.  This is an account of how I went about it.

Body & coachwork is the most visual part of any restoration, it creates a big  first impression but is mostly cosmetic. This can be very expensive and time-consuming but more rewarding on a day-to-day basis than the mechanics purely because it is eye candy. Get this right and the rest will follow.

The original SE shape I would have retained if doing a straight restoration however as this was to be a modernisation project to discover what could be obtained I decided to go for the later more rounded design of the S4s model.  My first task was to improve the aerodynamics where possible by smoothing out the panel fit which would also help to address the cabin wind noise.  The gaps / shut lines are very poor compared to a steel body car & this is a major contributing factor to wind noise. By improving these I could also clean up the general appearance giving the body a sharper, more defined look.

Once the Esprit was stripped to a rolling shell this work could start. The first step was to refit all the panels with relevant catches and new seals then shimming and setting to the best possible fit. By using a 1m steel ruler I could establish the body contour in the shut gap area then using an angle grinder I removed the gel coat approx 8″ either side and down the gap edges. A datum point was made on each end of the shut line then a small roll of resin impregnated fibreglass was inserted in the gap. Subsequent layers of fibreglass were then laid over the gap, in essence removing it. This was done on all the gaps on one panel at a time. Once the fibreglass was cured it was DA sanded then flat plane sanded with the rest of the panel and into the adjacent panels. Once all the high and low spots were established and any air pockets removed a coat of polyester filler was applied to the whole of the panel and the adjacent ones. This was then sanded using various blocks and plains all by hand, down to 180 grit.  This ensured the panel was flat and fit was as one with the rest of the body. Then a coat of fine polyester top stop was applied using the same procedure but this time down to 400 grit and with guide coat. We now go back to the datum points of each end of where the shut gap should be running  masking tape down the gap line you can then mark out accordingly then very carefully using a power saw cut in the new gap. This will be too tight initially especially for a door to open on the front edge so sand the gaps to a size where the door can open without fouling the front wing.  I did also have to relieve the inside of the front wing to facilitate the gap size I desired.

When this was done the panel could be removed and the edges cosmetically finished. The final sanding job was to remove a further 0.5mm from each edge surface to allow for the build up of paint which will be applied next.  During the earlier stages the door handle holes were reshaped to facilitate the new handle design along with the latch mechanism as was the bonnet contour and trailing edge. The tailgate was also cut and reworked to resemble the later models.  When I had done this procedure on all the panels plus the front and rear panel to fit the new lights and bumpers correctly painting could begin.

Different shops use various processes which will also change depending on the products used, but the principal is the same. I first coated the prepped panels with an etch/bar coat which seals in the substrate.  As I am using a solvent based painting system this is necessary to prevent soak down of solvents into the polyesters which could cause mapping in the final coat some time after finishing..  After a four hour flash off time three full coats of high build 2k primer were applied which seals the bar coat which should not be exposed to moisture. This was heat dried then left for 48 hours then shadow coated and block flatted. 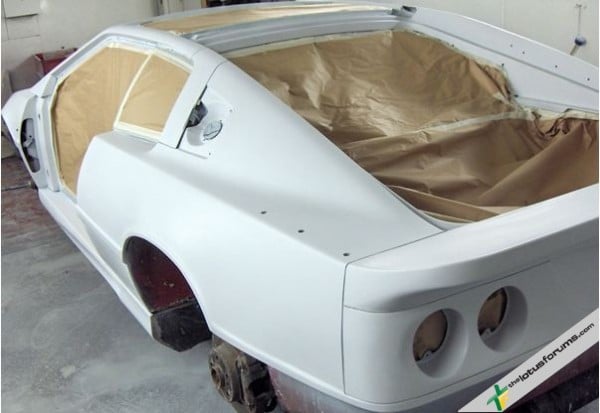 If any flatting resulted in rub though the process is repeated until uniform coat is achieved. The colour coat can now be applied with relevant undercoats to give the desired shade and pigment. I used a medium red under my Calypso for depth without going to dark in pigment. 3 full coats of colour were applied & this finish was heated and left for 48 hrs . I then block flatted the whole body with 600 wet and dry to smooth the finish and relieve the surface tension.  All panels were then heated again for 3 hrs allowed to cool then sprayed with a further 3 full coats of colour. This allowed the colour to obtain a depth with sufficient material on the structure for colour flat and polish..

All the body components such as the pedal box were  stripped and shot blasted regardless of condition, etch primed and painted. This provided a universal standard of complete inspection and overhaul of every component. Once complete reassembly was done using proper lubricants and new seals and joints etc. These components along with the wiring loom and some pipes could be refitted to the rolling shell.

During  this stage the pedal box was modified to allow it to move 1’’ further away from the seat creating more leg room. Previously during the body overhaul bulkhead changes were made to remove the passenger side electrics from the front storage area, placing them behind the glove box with an access panel which also allowed the wiper motor to be maintained without sections of dash being removed. The orientation of the motor did need changing slightly to facilitate this. It was also modified so the later arm & blade would fit. The bulkhead was also changed on the driver’s side, This was to allow the original pedal box to move forward & also allowed easy access of  the peddle box fixing bolts to the chassis from the front compartment along with the temperature control valve.

The rest of the basic components were fitted to the body and tested prior to the chassis being removed. The rubber mountings for the headlamp lift motors were removed and made solid. Although this makes the up and down movement noisy it is preferable to the bouncy lights when driving. Finally once all fitted and tested the front storage area could be carpeted and compartmentalised. This tidied up what was a wheel well and made it a useful storage area with added sound proofing qualities. The spare wheel was removed and replaced with repair inflator kit.

The design of the original interior I mixed and matched with bespoke sections based on later models.  The door cards were challenging due to changes on handle and latch mechanism to the door means the original door card was totally unsuitable. A complete new one was made out of the old and fabricated parts.  The aim was for it to stay in keeping with the SE style but encompass the later handles & the window switches were moved to the centre console. The binnacle burr veneer was renewed along with the switch covers, the gauges all reconditioned or replaced. The later style gear lever was fitted along with new heater control fascia and knobs & the column switches were changed to the later model. This was straight forward as the steering column was also changed to the 96  model power steering set up.  The fitting of that was a challenge as the pedal box and the dash cross beam did not match so fabrication had to be done to facilitate. The column shrouds needed to be modified to fit the old design dash and the later column..

When fitting the seats the aluminium spacers were removed to allow for the slightly taller person. Once at this stage some parts that were test fitted were now removed. This was necessary for the removal of the body from the chassis.  All the fixing points were undone and body lifted clear and stored in the roof while the chassis and engine are built… 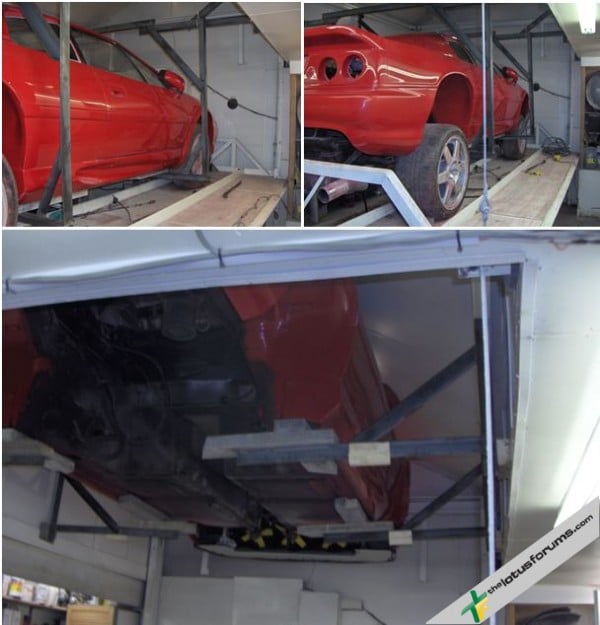