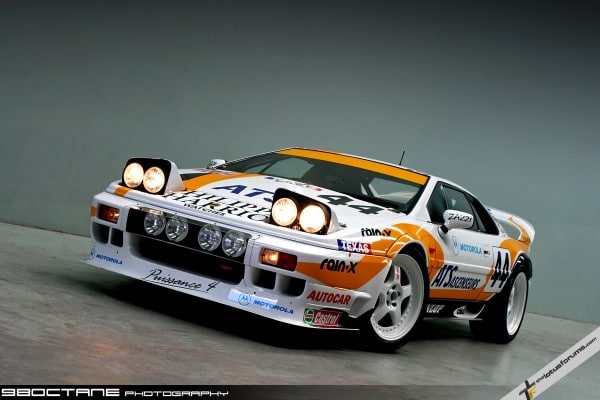 The Esprit is without doubt a head-turner. In terms of its looks, its a visually stunning car from all angles and in terms of performance, even today it can hold it’s head high in supercar circles. There have been many iterations of the car which was the Lotus flagship model for the 28 years of its’ production but none were as quick as the 4 cylinder turbo charged Sport300.

Take the Sport300 and let Lotus Sport and British race outfit Chamberlain Engineering loose on it as an entry to the 24 Heures Du Mans in 1993 and you have a car on steroids, spinach and protein shakes. Unfortunately the 2 cars DNF’d and the same in 1994 due to overheating problems during pitstops, accidents and other expected Le Mans incidents during the worlds most gruelling track race however that doesn’t stop the car from becoming a legendary Esprit. Lotus did return to Le Mans in an Esprit V8 GT1 1996 with similar success.

Step in TLF member ‘Andecorp‘ of Melbourne, Australia. Andecorp already has an Esprit addiction owning a concours winning and speed record holding immaculate norfolk mustard Esprit S4s. Not content with the fastest and best looking Esprit in Australia he bought the Australian equivalent of the Le Mans Sport300, imported originally in 1993 by Lotus Australia to race in the Australian GT championships.

Costing in excess of £200,000 to build, the car had pole position in almost every race it entered. It held the Bathurst 24 hour lap record for over 10 years and in 1994 it won the GTP championship driven by Brad Jones.

Although mainly identical to the Le Mans car with non galvanised chassis and many carbon fibre panels, GTP rules didn’t allow the cars to have fuel bladders, so normal tanks were retained. Also, the roof vented roof and bonnet panels were not allowed. The car also has working electric windows and mirrors, as dictated by GTP rules (cars must be ‘standard’ production) but the panels are so thin, they are almost flexible. The bonnet, roof and tailgate are very thin carbon fibre. The dash switches (hazards, parkers, etc) hide various add-ons such as over boost, gear box cooler activation, ABS on/off, etc, something I’m sure Q and Bond would approve of had they got their hands on the car.

During the cars race career, Lotus UK trained service manager Paul McCreery became the car’s custodian, by travelling with her at all the races, and being in charge of all the maintenance. Paul now works for Andecorp, as his private mechanic maintaining all of cars after the simple economics of so many supercars worked it out cheaper to have a full-time mechanic on board!

An estimated 900kgs with 440bhp @ 6K (redline is 8k) the car is quick, very quick. As you can see in these videos not only is the car fast but it looks and sounds like it should and best of all, it’s being driven as it should.

This car, the GT300 is for sale to the right person for the right amount but you’ll need a seriously large pile of cash to purchase, it won’t be cheap.