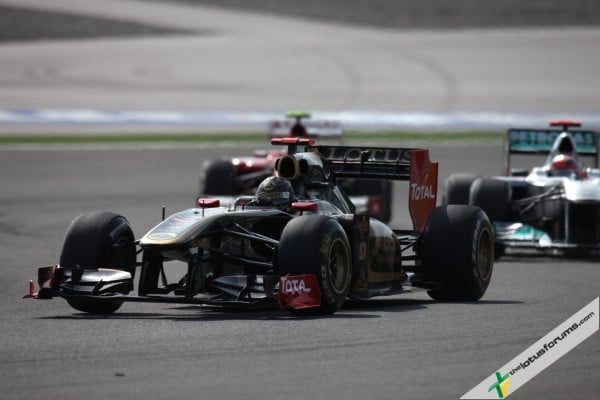 In a race packed full of pit stops, LRGP advanced on yesterday’s qualifying positions by finishing in P7 (Nick) and P8 (Vitaly). After scoring another 10 valuable points, Lotus Renault GP remains fourth in the Constructors Championship.

Vitaly Petrov, P8, R31-04
“It was an interesting race, and strategically it was challenging for all the teams. I think what really affected my position today was the collision with Michael early in the race. He hit my car and then I was stuck behind some slower drivers after the first pit stop. If this had not happened, my race would have been much stronger and I could have pulled away. However, I was pleased to overtake Sebastien (Buemi) at the end, which took me back into eighth. We must be positive, we have both cars in the points and it’s another ten points for the team.”

Nick Heidfeld, P7, R31-03
“It’s always good to score points, but I think I could have finished even higher up today, even though I started in P9. I am not totally happy with the race -I was stuck in traffic for quite a while, overtaking was difficult and Vitaly made contact with me- but my pace was good, especially at the end of the race when the car was light on the soft tyres. I also think our strategy was the right one. Overall, to finish in P7 and take six points for the team is good, given that I did not qualify in a higher position.”

Eric Boullier, Team Principal and Managing Director
“Today, going for four pit stops was the right decision. There was no spectacular start from our cars but we pitted at the right time to ensure both drivers finished in the points. We definitely need to work harder on Fridays to understand the tyre degradation, which will allow us to know where we stand for the rest of the weekend. From here, we will push even more as the result today was not as strong as it could have been – we will be striving to get back into the top six. ”

James Allison, Technical Director
“Today we opted for a four stop rather than a three stop race, and the balance of the evidence suggests that was the right choice. In all honesty, I feel satisfied rather than happy with today’s performance – satisfied because our finishing places in the race were stronger than our qualifying positions, but not happy because the gap between us and the cars that finished on the podium was too large. We have more improvements planned for the car and we will be aiming for top six finish or better in the coming races at Barcelona and Monaco.”

Riccardo Penteado, LRGP Engine Support Leader, Renault Sport F1
“Another double points finish for Lotus Renault GP, which after the issues of the last race is a good result. We planned an aggressive strategy to try and catch Jenson (Button) at the end and fuel consumption was very high, even higher than in qualifying, so we were very tight on fuel with both cars. It almost worked and Nick wasn’t far away – just over a second. It was a shame that we got caught in the traffic and could not get ahead but the most important thing is that we got another 10 points and consolidated our position in the championship.”