Saturday at the Korean Grand Prix began with a trouble free third practice session for Lotus Racing with the good news continuing into the afternoon when Jarno Trulli finished at the head of the other new teams in 19th place, with team mate Heikki Kovalainen behind him in 21st. 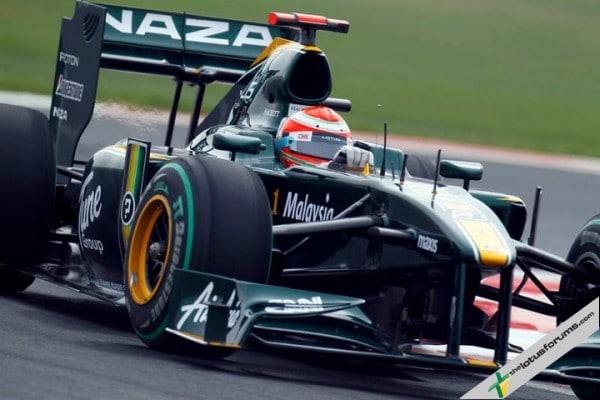 Jarno Trulli (Chassis T127-02) FP3: 15 laps, best time 1.41.623, 19th / QUALIFYING: 19th, 1.40.521, 10 laps “I’m happy with how it has gone today and I think my final lap was pretty good. The track was very dusty again in both sessions today, and that obviously affects the tyres, but I think we did as well as we could have hoped for this afternoon. I want to say thank you to my mechanics again because they have been working really hard all weekend – it has been a bit of a tough couple of days so far, because the bad luck I had yesterday limited my track time, and it’s thanks to the guys in the garage that I’ve managed to get in enough running time to set me up for that quick lap today.”

Heikki Kovalainen (Chassis T127-03) FP3: 19 laps, best time 1.42.095, 21st / QUALIFYING: 21st, 1.41.768, 9 laps “I’m pretty disappointed with how it went today. We were looking ok this morning but I think the strategy this afternoon didn’t give me a great chance to go any quicker – the traffic obviously played its part, and when you’re trying to push on a dirty track it’s always going to be a struggle. But we’re here to fight tomorrow, and as the grip levels evolve I think our car will become stronger, so there’s all to play for in the race.”

Mike Gascoyne, Chief Technical Officer: “I’m reasonably happy with the qualifying today, although it’s a little disappointing that the tactics in qualifying, and the traffic, played their part in denying Heikki a clear run at a quick time. Jarno produced a very good lap to finish the best of the new teams on his final run, and I think that these grid positions give us a good chance of having a strong race tomorrow.”

Tony Fernandes, Team Principal: “A pretty good day for us, and seeing Jarno put in such a good lap at the end of Q1 after a slightly difficult weekend on his side of the garage shows exactly what he and his pitcrew are made of. We made a mistake with Heikki’s strategy, and that prevented him from being able to get closer to Jarno, but a good job by both drivers, and the whole team, to keep us ahead of our nearest competitors.

“From a team perspective, it has been very pleasing to see what a great event the race organisers have put on here in Korea. We were never in any doubt that Korea would pull something special out of the bag for us, and from the moment the cars first went out on track yesterday, the welcome Lotus Racing and the whole F1™ fraternity has had here has been outstanding. It was particularly good to see a couple of very dedicated Lotus Racing fans waving our flag in the stands, and the Korean media have given us some excellent coverage, so I think we will leave here having gained another army of new fans. We will do our best to reward them with a strong performance in tomorrow’s race.”