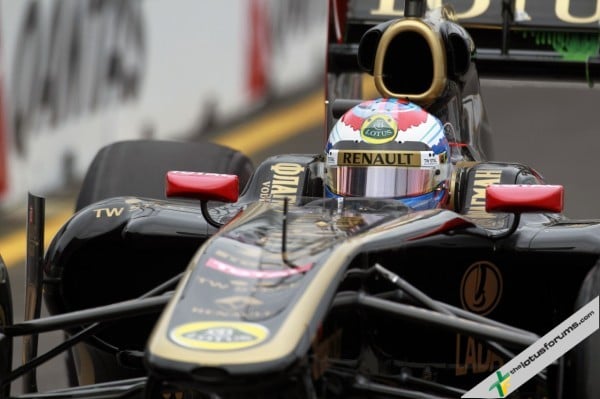 It was a day of mixed fortunes for LRGP as Vitaly qualified on the third row, while Nick missed out on a place in Q1 after getting caught up in traffic.

Vitaly Petrov, P6, R31-03, 1:25.212
“After all the hard work during a very tough winter for the whole team, it feels great to come here and qualify on the third row. There was a lot of pressure in Q3 because I only had one run, right at the end of the session. So there were no second chances and I’m glad I was able to deliver the lap. The car has felt good right from the start of practice and we’ve improved it constantly during each session. I think we are in a great position for the race and that we can fight for some points tomorrow. I’m not too worried about the tyres because they have been working well for us so far and we have not seen the drop off that we saw during winter testing.”

Nick Heidfeld, P18, R31-01, 1:27.239
“I’m disappointed to be starting the season from so far back. It wasn’t an easy session and I had a problem with the KERS, which meant I had to change some settings, and that cost me one of my timed laps. Then, there was so much traffic and I tried to find some free space, but it didn’t work out for me. It’s bad luck, but I must try and put that behind me now. As we have seen with Vitaly, the car seems to have good pace and the race is wide open, so hopefully I can move forward and fight for points.”

James Allison, Technical Director: “The race may not be as frantic as we expected”

James, a mixed session for the team. What is your verdict?
We’re all very pleased with sixth on the grid for Vitaly, but sad for Nick that a troubled session in Q1 saw him eliminated early on. P18 is certainly not a reflection of the pace he has shown throughout the weekend.

Did the pace shown by Vitaly confirm what you had seen during testing?
It was very hard to judge from winter testing exactly where we stood in the pecking order. However I was really pleased with the way Vitaly improved the car steadily through the weekend and produced really consistent results in each part of qualifying. Still, there is a big gap to pole position and we need to work on reducing that.

Looking ahead to the race, what are you expecting?
From what we could tell during the pre-season, our car seemed to run pretty well on its tyres, so hopefully we can make good starts with both cars and move forward during the race. It’s too early to have a feeling on race pace, but I think we will be able to maintain and improve on our qualifying competitiveness.

Will it be a race all about tyres?
So far this weekend the tyres have proved durable and consistent – much more so than we saw during testing – and that’s the case for both the hard and the soft compounds. So perhaps the race might not be quite as frantic as we expected before we arrived here.

Did you know?
At Albert Park the gain from DRS (the rear wing drag reduction system) during a qualifying lap is around eight tenths of a second.