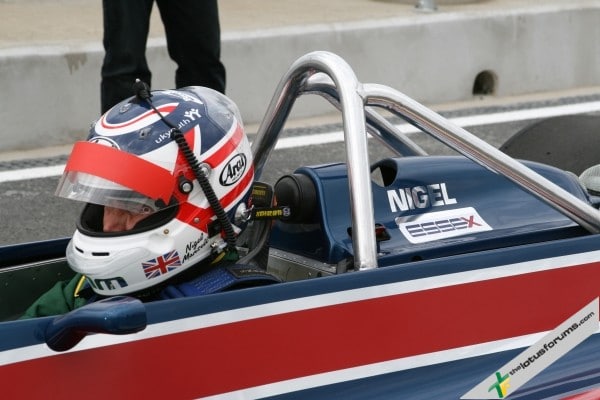 You’ve taken memorable wins at both Brands Hatch and Silverstone, so what is it about the latter that makes it, in your opinion, the home of British motor racing?

They’ve had grand prix racing at Silverstone since 1948, so there’s a lot of history and, thanks to the extensions to the circuit, the new pit building, and the work that the circuit’s owners, the BRDC, are doing, a fantastic future awaits. The new Silverstone ‘Wing’ building is an amazing attribute to the Grand Prix, and now we can be proud to have some of the best facilities of anywhere on the F1 calendar.

How do you rate the track from a racing perspective?

It is a brilliant track with some wonderfully flowing corners, overtaking opportunities, very high-speed. It’s a real driver’s track requiring great skill and bravery. You can really hang the car out on some of the corners. You can pick up a bit of time if you’ve got the balls for it.

Nineteen-eighty-seven was very special. I was 29 seconds behind my team-mate when I exited the pits, with just 28 laps remaining. In the last 15 laps I broke the lap record 11 times. I just wanted to win, simple as that. At the end, there was nothing left in the car, and no fuel in the tank. I took it to the limit and beyond. I sold Piquet a dummy as we approached Stowe corner – I darted left, he covered, and then I committed to the right, taking the inside line, my foot buried. The crowd went completely berserk, I could see them get to their feet, I could hear the roar of applause inside my helmet. That’s the other amazing thing about Silverstone, the fans there are sensational. They’re the best in the world.

What are your memories of your first British Grand Prix?

The first one was in 1981, with Lotus, but our car was banned. The twin-chassis Lotus 88 was deemed illegal so the lads had to build a new car overnight to qualify. It was half an 88 and half an 86 and it didn’t go very well. But Silverstone was something else back then, in the ‘ground effect’ days. You could go flat-out around Stowe, Club and Abbey, it was so bloody fast. The G-forces around the corners meant we had trouble breathing.

You’ve raced for British teams Lotus and Williams many times at Silverstone. Do the boys tend to put in that extra little bit of effort at home?

I think they do. It affects all the good people the same. There’s a little more excitement and energy. It means more to you, whatever your field of expertise. It’s the one opportunity of the year to show what you can do on home turf.

This weekend, the pack could be reshuffled due to the clampdown on exhaust blowing. What are you expectations from Lotus Renault GP this weekend?

From what I’ve heard, the clampdown is going to cost 3/10ths of a second on average, and I’m sure some teams will be affected more than others. These teams do not stand still. As soon as they know of a new regulation they start testing in two or three wind tunnels simultaneously. Lotus Renault GP have incredible facilities and a very smart aero team, so they have the tools they need. It is going to be very intriguing to see who is affected the most, and who can move ahead on the grid.

Last weekend you were at the Goodwood Festival of Speed, piloting a Lotus Evora GT4. Did you have fun?

Lots of fun. Goodwood is a great event and it was fantastic to meet so many fans there, who can get really close to the machinery and come and ask us questions. The Lotus Evora is a stunning car. The one they gave me was in the old Gold Leaf racing colours, and it looked very pretty. Unfortunately the tyres were a bit too warm already when I tried to do a ‘donut’. I think I could have used colder tyres and I should have gone with a bit more power, because I ended up in the grass. But the spectators seemed to enjoy it.

There’s some talk that this might be Lewis Hamilton’s last British GP for McLaren. Do you believe he will leave, say if an offer comes from Red Bull, Ferrari, Mercedes or Lotus Renault GP? And would it be wise to leave McLaren?

He’ll make his own decision, but if I were him I would consider my future very carefully. McLaren is a great team who know how to win races and championships, and they have supported Lewis his whole career. They might be a little behind Red Bull now but they will claw that back and we will see them dominate again another season. As Michael Schumacher proved at Ferrari, continuity is key, and when a team is molded around the driver as McLaren is molded around Lewis – they know him better than he knows himself – it’s the best possible environment for that driver to thrive. McLaren are still there, challenging for wins. I think a bit of patience could pay dividends.

Jean Alesi – “One of the best British GPs I’ve seen”