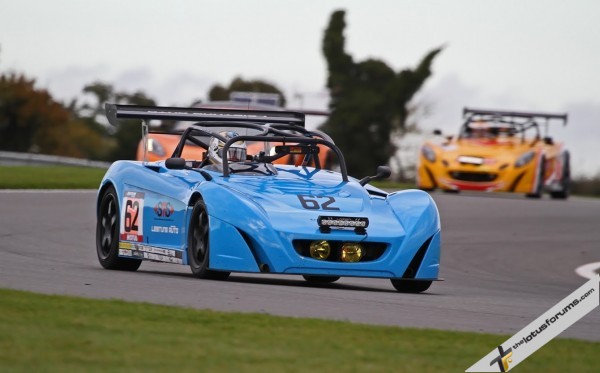 Poleman Fabio Randaccio’s Europa retired from the lead of the race near the end of the first hour, and with Adrian Hall still playing catch-up from earlier issues when the first batch of points were awarded, this left Knight running second to Marcus Jewell. With closest SuperSport challenger Simon Deacon only 21st after electrical issues dropped him from second place, things were looking good for Exige V6 Cup R driver Knight. By contrast, Gore, fastest Production driver in qualifying, was only fourth in class at this point, one place behind rivals Stuart Ratcliff and Anthony Dunn.

Hall fought back and was within sight of title success with second in the Open class, behind Matt Bartlett, when Adam Balon conceded a place to Knight late on to seal his friend’s championship bid. Knight finished third behind 2012 champion and 2-Eleven driver Steve Train, who took the race victory. Deacon could only finish third in class, ending his chances of a second consecutive SuperSport title.

“I’m over the moon,” Knight said. “The car’s been great all season and really reliable. It’s great to win it in a brand new car and hopefully there will be more in the championship next year. I’ll definitely be back to win it again.

Knight’s title was also a triumph of reliability, with Deacon and Open class competitors Ian Fenwick and Steve Gugliemi the only other SuperSport drivers to complete all of the races. Meanwhile Gore recovered to win the Production class ahead of Ratcliffe and Dunn, who also scored in every single round, sealing a title double after taking the Elise Trophy championship last time out at Donington.

Afterwards Gore said: “It was very tough, so I was just trying to finish to make sure I had got the championship. I thought fourth was enough at the first hour, then I was second and 88 seconds behind the lead, and my clutch went on the second-to-last lap. I did a lap and a half in third gear and then fortunately the lead car dropped out and I won. I’ve got a deposit down on an Exige V6 to do SuperSport next year, and I could do the Trophy again next year because I just love it.”