Round two of the Australian GT competition was held last weekend (May 22-23) at the Phillip Island track in Victoria. Hiding in a very tough grid of 35 cars (among which various Audi R8 Ultras, McLaren 650S GT3s, SLS AMG GT3s, Ferrari 458 Italias, a number of Lamborghinis and countless Porsche GT3 Cup cars) was a single Lotus Exige Cup R, sponsored by Donut King, driven by Tony Alford and Mark O’Connor and prepared and supported by Simply Sports Cars, the Lotus dealership for New South Wales. If spectators didn’t take much notice of the Lotus at the start, it certainly made it presence felt when it crossed the line after a punishing race as the winner of the GT Challenge class, and in 17th place overall. With four rounds to go in the championship, the Donut King team is now at the top of the GT Challenge leaderboard, and Simply Sports Cars is already preparing for the next round on the Townsville street circuit, held in the weekend of July 10-12. 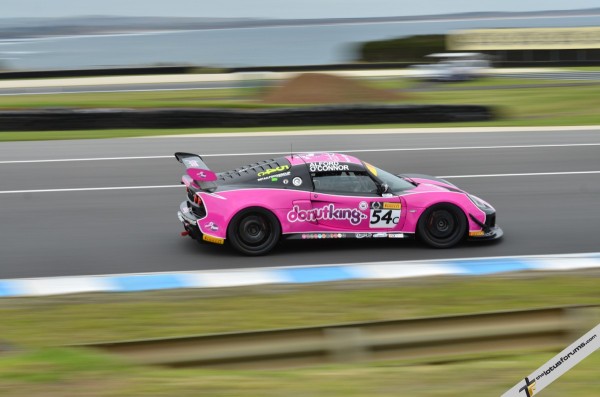 “It turned out to be a gruelling but very rewarding weekend. I ended up doing 66 laps in the Lotus and another 70 in the BMW over the course of the weekend which works out to be about 600 kms. I’m pretty sore today.”

“Friday wasn’t a great day for us in the Lotus as we had a problem with a cir-clip that kept coming off a drive shaft. This resulted in the drive shaft coming out of the gearbox and we lost all drive. Simply Sports Cars managed to find an almost suitable replacement locally and with some modifications it got us out of trouble. The pesky cir-clip and a couple of red flags meant that Tony and I got less than 12 laps of running between us during the 3 practise sessions on Friday and didn’t get a chance to tune the suspension to the circuit.”

“I was pretty happy with a 1:36.4 during qualifying but was ruing the missed opportunity to tune the car up as we were losing a lot of time because of over-steer driving off Siberia and Turn 11.” 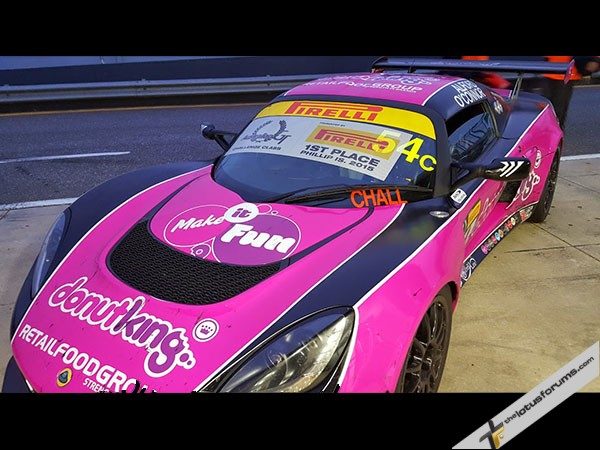 “Combined qualifying times had me starting behind a spectacular field of 33 GT cars for the 101 lap race. I made my usual cautious start but still managed to make up 6 spots at the end of lap 1. I was trying to hang with the Porches as best I could as 1/3 of the points are awarded at lap 40. The car was telling me that it didn’t want to go at that pace but I didn’t listen and a few laps in at turn 11 it said ‘I told you so’ and we took a trip through the gravel trap. We lost about 10 seconds as a result so I had to put my head down and put in some consistent laps at the pace the car wanted to go rather than the pace I wanted it to. At the 40 lap mark we’d manage to claw back to 2nd in class and get some decent points.”

“Our superior tyre wear and fuel usage meant we could go much further into the race before making our 2 compulsory pit stops. I was called in after 52 laps which turned out to be perfect timing. During our stop a safety car was called out and Tony just managed to beat it out of pit lane. This meant we could do our 2nd compulsory stop behind the same safety car and go a lap up on our class rivals. From there all Tony had to do was cruise home to take the class win and the Challenge Class Championship lead. In the process we managed 17th outright in a stunning field of GT cars.”

“It was a great team effort with strategy playing a large part in taking out the win.”

Fast forward to about the 2hr 30min mark for the GT race.