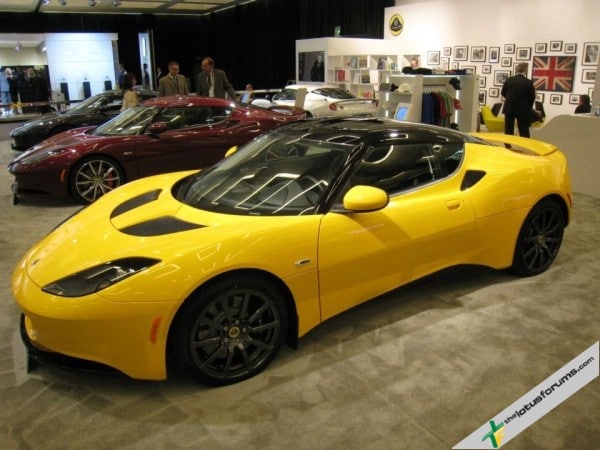 Lotus utilized the Los Angeles Auto Show today as a platform to announce three partner teams that will race the new Lotus IndyCar V-6 engine in the 2012 IZOD IndyCar Series. Alongside this Lotus showcased developmental updates on future products and introduced the new Evora with Intelligent Precision Shift (IPS) transmission to theWestern US.

Just as developmental work is progressing at full speed on the first of Lotus’ future cars, the all-new Lotus Esprit and its clean-sheet high performance V-8 engine, Lotus Motorsport is rapidly readying its new twin turbo V-6 IndyCar engine for the rigors of racing.

Group Lotus Director of Motorsport Operations, Miodrag Kotur said: “At the LA show last year, we announced that we will be an engine supplier to IndyCar and exactly 12 months on, we are here with an all new Lotus engine and three teams, ready to go. The numbers that the engine is already achieving in our dyno testing are extremely encouraging so our hard work is well and truly paying off.”

“These partnerships with Bryan Herta Autosport, Dreyer and Reinbold Racing, and HVM Racing mean a great deal to Lotus Motorsport and mark the start of a new chapter for Lotus in the IZOD IndyCar Series. We’re thrilled that these already successful and illustrious teams have chosen Lotus, as we believe that our capabilities as a partner will pay dividends for them in the future. These three teams have immediately become part of the Lotus legend and have joined us in our journey as one of the most innovative and successful sports and racing car brands in the world.”

Each of these racing organizations, as Lotus partner teams, will benefit from the extensive testing and development work of the others to more quickly achieve the mutually desired competitive results.

In addition to the new Lotus V6 twin turbo IndyCar engine, work is continuing on the new Lotus Motorsport facility inIndianapolis, which will give the company its base close to the action and its partner teams.

As the 2012 IZOD IndyCar Series season draws nearer, further announcements will be made by the teams at their individual launch events in due course.

Jean Alesi to race for Lotus in Indy 500