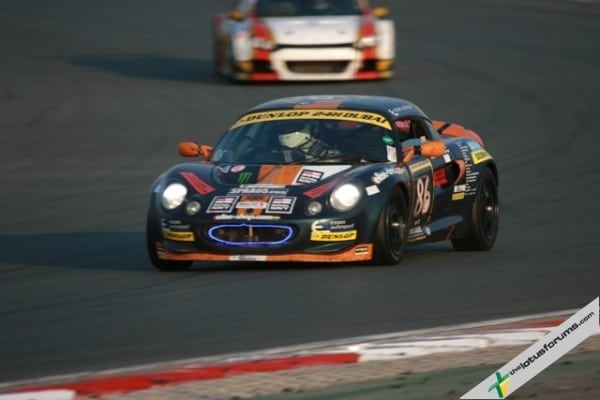 Team Elise Trophy have completed the Dubai 24 hour finishing 46th overall out of 85 starters, in Paul Golding’s famous Lotus Elise S1 run by a team made up entirely of volunteers and companies donating time and parts, in particular Essex Autosport who built, prepared and ran the car during the race.

Everyone arrived at the circuit on Tuesday 11th January to unload the container and get the garage set up. Our pit garage was shared with Sun Red’s WTCC supporting SEAT Leon and for the first time ever three Mercedes SLS from Black Falcon and Heico Motorsport. With the car unpacked, tires collected from the 9,000 brought out by Dunlop the event stickers where applied and late afternoon it went off to be scrutinized by the FIA officials. In a bay full of exotica from Lamborghini to Porsche, Ferrari to Aston Martin the little Elise was swamped but it passed with no issues at all – a testament to the prep work Essex Autosport had done.

Wednesday was an early start with drivers and team members getting the opportunity to take their rental cars around the circuit. Whilst the 4 drivers spent time learning the circuit Steve Williams, Andy Walsh and Phil Knight gave fast rides to crew members of the Royal Navy’s HMS Cumberland which was docked in Dubai. When the afternoon came it was a chance to test the race car and get the set up right, running slicks on a standard car and in these conditions was going to be a major test. Andy Walsh was our designated driver coach and the set up expert so with the car set up the drivers got their first chance to sit in the car and to drive it. Almost immediately there was a problem with the new gear box that had been fitted just before traveling, changing down from 3rd to 2nd was causing it to jump out of gear. Luckily 2nd wasn’t required but if rain had come it would have been invaluable. When the optional free practice was complete the spare box was fitted ready for Thursday and plans were made to bring out a 3rd box as back up, even though the one coming out would still be okay to use if the worst case evolved.

On Thursday we were at the track at 9am for the Drivers briefing and signing on, with free practice coming up soon the team prepped the car for the hot weather conditions, James Knight and Ken Savage had their go in Free Practice 1 with the new gearbox performing well. In Free Practice 2 Simon Phillips and Pete Storey went out and with no issues in both sessions the drivers were having lots of fun. A few minutes later we were out for Q1, this meant all cars out and a packed circuit. Yet again the car ran perfectly and everyone kept out of trouble with all four drivers easily completing the minimum number of laps to take one more worry away.  Next up was Q2 which was restricted to fewer cars, this was always our target session for a good lap and James Knight did some great times and put us in at 77th out of the 85 runners. Of course where we qualified was never going to affect the final result but it was important we got through it in full and set a competitive time in class. As if that wasn’t enough track time for one day we then had to complete the 2 hour night practice which again went to plan with all 4 drivers doing excellent stints and the car not missing a beat.

Race day was upon us with the team arriving early and doing final checks, there was a surprisingly relaxed atmosphere in the garage in contrast to others – something that set us apart all weekend and helped a lot with 4 drivers who were new to endurance racing.

The target was to get to the end, ideally with the drivers getting at least one long 2hr stint each. Because of our weight we were set a maximum fuel tank size and 2hrs on track at a time so 1hr 55mins was our aim. If we took the chequered flag having spent half the night in the pits no problem, after all the UK version of this race tends to be stopped or safety car comes out due to fog for hours. We wanted the chequered flag and ideally not to finish last in class and lower than 80th.

Paul Golding had decided the driver order and Simon Phillips was strapped in for the start. The awesome sight of one of the largest grids assembled in recent motorsport history sent shivers down the spine. Off we went and immediately a Porsche hit the wall with the 211 getting hit by the loose wheel so code 60 in place – 60kph max speed no safety car – off we go again and the best 2hrs of Elise racing we’ve had. It all went to plan and Simon did a 1 hour 53 min stint with no issues. Ken Savage was now in the car, refueled but with a battery light however the car running okay. He was on the apex of the corner when a Lamborghini attempted to go for the same apex hitting the rear wheel arch and sending him sideways. At the end of his stint it was decided to investigate the warning light which turned out to be a broken connector resulting in a loose wire to the alternator. This was re-attached adding 25 mins to the stop. Pete’s session in the car resulted in some great lap times which James watched while on standby as the next driver panicking about Pete’s speed being too quick – but Andy Walsh and Steve confirmed all was okay and he was keeping off the kerbs and very smooth. James Knight in next and it was nearly 2hrs of singing over the radio from the pink punter. Superb, four sessions complete all drivers happy, objective 1 achieved. The night went extremely well and included a fantastic firework display at midnight which Ken enjoyed from the car. In the early hours a Porsche tried pass coming out of the corner and caught near side mirror and we had to pit to get it changed.

At 8am Paul decided we were going to race flat out even if we didn’t get to end as the team were so delighted with the car and drivers. This was not something we had planned for but the next few hours were spent fixated to the timing screens hunting down and passing cars whilst setting numerous new fastest laps. At one point we even went past an SLS on track and were picking off a huge number of Porsches in particular. With 2 hours left alternator warning light again came on, a quick decision was made to continue running for fifteen more minutes with no charge going into the battery to take us past 12 noon (and important milestone as it gave us just one remaining session).  To prevent additional battery drain it was decided to stop all pit to car comms – we had previously experienced the issues with battery drain during Ken’s earlier session where the alternator wire had broken loose. Simon pulled the car into the pits put on attempting to push it into the garage the rear nearside wheel locked up.  Quick Investigation showed the rear side wheel bearing failed causing massive heat resulting in the rear driveshaft CV boot ballooning.  The alternator issue was resolved as the now missing belt was replaced and a press located in the Mercedes garage to press a new bearing into the hub (our spare having been utilized earlier in the race). This lost us considerable time in the pits but with such a good buffer over cars behind us and other cars in our class developing trouble at a similar time meant the impact on position was not too bad.

We finished the race in 47th which was a great result and we are very pleased. Ken Savage commented on the result, “We are happy with were we came in the race. Our objective was to finished and that is what we achieved. Simon Phillips after the race said, “The was a great experience for all of us and I thoroughly enjoyed it.”

The car is now loaded back into the container to be shipped back to the UK, who knows what next year will bring!