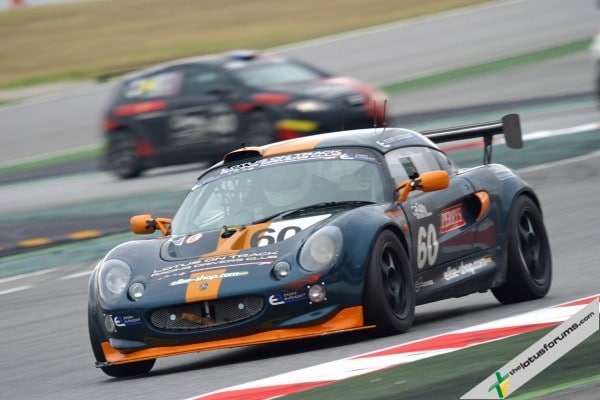 Team LoTRDC completed the Barcelona 24 Hour race last weekend (24-25 September), lasting the distance with the oldest and lowest-powered car, in addition to the smallest budget of the field. With a team picked from Elise Trophy and Lotus Cup drivers, mechanics and administrators and prepared by Essex Autosport, they repeated their finish at Dubai earlier this year.

With a brief to compete for class victory, the team’s series one Elise of 1999 vintage posted a fastest lap just two tenths from the benchmark time. The car was able to lap consistently at this pace and led the class, however an electrical fault cost around 40 laps in the garage, which was the lap difference to the class-winning team.

With the team concentrating on the race and minimising practice laps, the car, shaken down by FIA Formula Two hot-shot Ramón Piñeiro, qualified in 50th place out of the 59 that took to the track on Friday, and the night practice programme was completed well ahead of time.

The race started in wet conditions and Simon Phillips made up many places in his stint, handing over to Ken Savage. The fine progress continued and with Pete Storey next in, the class lead was taken in the fifth hour, with the team close to breaking into the top 20 overall.

When James Knight took over electrical gremlins struck and half of the next three hours were lost to fault diagnosis. After replacing the alternator and coil, the problem was traced to a faulty earth and after this was fixed the car ran faultlessly for the remainder of the race. Only fuel surge and a trip over the kerbs triggering the electrical cut-out cost further time, this coming after superb efforts from the drivers throughout the night to claw back places.

The team never dropped below 50th place and eventually finished 38th overall and 8th in class in the same car that has previously been raced by Jake Humprey, Wing Commander Andy Green and Martin Donnelly. Modifications were restricted to endurance-specification parts and the car will continue to race in selected LoTRDC races and future endurance events.