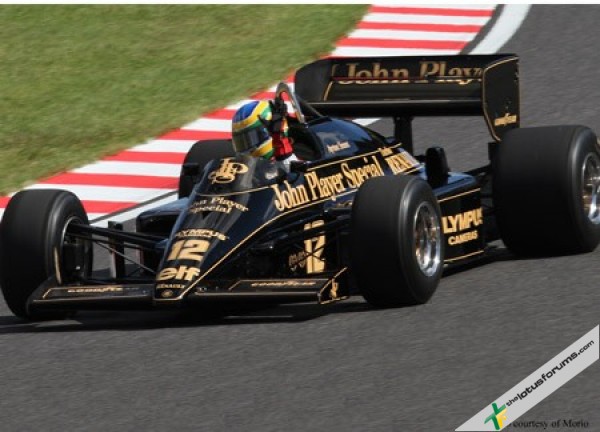 Chris Dinnage, in particular, made a massive effort to have 97T/1 ready just in time for it to be airfreighted to the Japanese Grand Prix. After a massive downpour on Saturday the F1 qualifying took place early Sunday morning, just after the scheduled demo laps for Katsu Kubota’s type 97T/1 and 78/4. We are fans of Bruno Senna and to his great credit he stuck to his commitment to do the honours.

Both cars created a lot of interest from the current F1 drivers, especially Rubens Barrichello. When the rain finally stopped, Bruno Senna drove his late Uncle’s Grand Prix car round the track, followed by Takuma Sato in the type 78/4.
Katsu watched proudly from the VIP club, as he was a sponsor of the Sauber team. 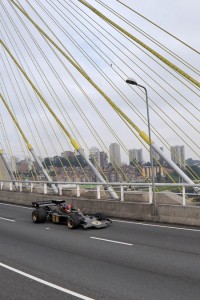 Brazilian Grand Prix
The Team Lotus type 72/5 took a trip out to Brazil with Chris Dinnage in attendance, as it was the 40th Anniversary for Emerson Fittipaldi’s first Formula One victory. Emerson drove the car round the streets of Sao Paulo and it was all caught live on Brazilian TV by a helicopter following him from above.
(We recommend looking up the Globo TV coverage. You will find a link on our homepage.)

He stopped outside the Sao Paulo World Trade Centre and was greeted by an abundance of local journalists for a press conference. He said that he loved driving the type 72/5 as it was the car in which he won the 1972 World Championship. Emerson became quite emotional talking about it.

Then, it was on to the Brazilian Grand Prix. Emerson walked down the pit lane with thousands of cheering fans; he jumped into 72/5 and drove two laps in the glorious sunshine with the whole circuit giving him a standing ovation.

Emerson was presented a trophy from Bernie Ecclestone to commemorate the Anniversary and the Mayor gave him the Freedom of the City plaque.

The Macallan Lounge exhibited at the MPH Shows (London and Birmingham) and featured the Ayrton Senna Camel Team Lotus type 99T. Macallan invited visitors into their seating area to enjoy a complimentary dram of The Macallan Fine Oak 10 Year Old Whisky and view Ayrton’s 1987 car from 1987 which he raced to victory in Monaco and Detroit.

Pirelli took our Type 94T show car to Milan and will be taking it to Florance again in late January as well as the Type 92 to the Autosport International Show, Birmingham. As Pirelli are the main tyre suppliers for the 2011 Formula One season, what better way to promote their brand than with Grand Prix winning Team Lotus Formula One cars. 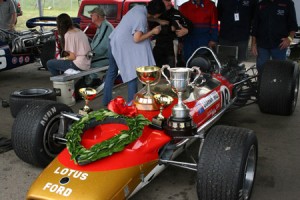 Congratulations to Adelicia Harding on a splendid victory with 49B/R8 at Eastern Creek to win the Tasman Cup. Once again John Smith did the honours behind the wheel, and saw off a number of contenders from overseas.

After a lengthy restoration project by Nick Yallop of the Works Team Lotus Type 81/1, we are pleased to announce that the car is now fully restored and will be making its debut at the Autosport International Show in January. 2011 will be 25 years since we lost Elio De Angelis, and we are looking forward to running 81/1 at one or two historic events, to celebrate the memory of Elio.

We are delighted to have welcomed the 1978 JPS Team Lotus type 79 chassis 1 to the Classic Team Lotus workshops, after more than 30 years since the sale of the car to Hector Rebaque. The car is in exceptionally original condition, and Nick Yallop is getting stuck in to a full restoration on behalf of its new owner, Paul Rego of Dallas, USA. The intention is for it to return to racing at the Legends of Motorsport event at the Barber Park Raceway in May 2011.

The restoration of the type 102/4 for Andrew Morris is continuing, although we are waiting for the engine rebuild to be completed. Lewis Cullington has done a great job to prepare the car to Works standard, and to make one or two modifications to the cockpit area in order to accommodate Andrew’s ‘slightly larger than Donnelly’ frame.

Similarly the restoration of Joaquin Folch’s type 94T is held up with engine rebuild issues, but these should be overcome shortly, in time for the car to be tested at Hethel before making its public debut at the Spirit of Montjiuc event at Barcelona in April.

Bob Dance is back on to the Chapman Family Lotus Eleven, which he has been doing when time allows, in between his commitment to maintaining the John Bower’s type 25/R4, amongst other things. The original 20 gauge aluminium bodywork has been restored brilliantly by Competition Fabrications. Malcolm Ricketts reckons the shutlines are better than on his lovely Eleven.

Kevin Smith has been working hard on the type 27 Formula Junior acquired recently by Nick Fennell. Together with his type 25 and a number of lovely Lotus Sports Racing cars, Nick now has a very special collection of early Team Lotus racing cars. The 27 is looking really splendid and Kevin has taken great care to restore the car back to exactly its original specification.

Another welcome arrival to the Classic Team Lotus workshops is the Formula Junior Cooper of Paul Dezelsky, who has purchased the car with a view to getting started in historic motorsport; an excellent way to get going. Tim Gardner will be responsible for restoring the car to race ready condition.

Lotus Cars News August 26, 2016
In a celebration of style and lightweight performance, and helping mark the 50th anniversary of the company’s famous Hethel site, Lotus has revealed the...

Other News, Features & Events December 18, 2012
Occasionally Lotus have a clearout of parts for historic cars and TLF members have been lucky enough to save hundreds of thousands of pounds this...