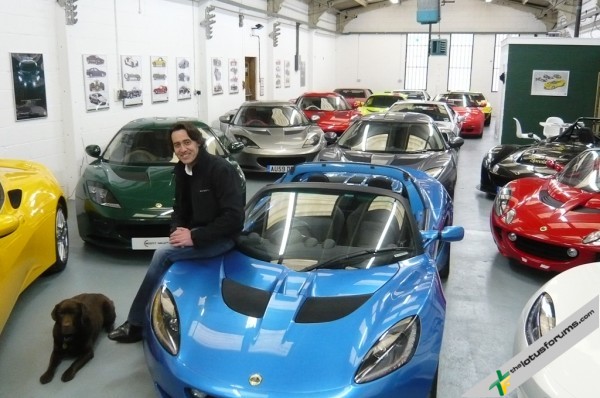 Rob Walkers were a race team that were based in Dorking, and it was this team that gave Lotus their first ever GP win at Monaco, with Moss driving Rob’s Blue Type 18 at Monaco. Rob Walker’s continued to race successfully as a private outfit, but also sold cars – in fact, they were the first private multi-franchise group to appear on the stock exchange and held a Lotus Franchise based at their Corsley showrooms.

Scott Walker is a name that many owners and enthusiast already know of, having run the Lotus dealership at the famous Bell & Colvill garage in Surrey for a good few years, Scott decided that after a sabbatical he wanted to continue to sell the cars that he loves. Scott Walker’s (Sportscars) based in Dorking, specialise in used Lotus cars, plus other sports and classics and offers secure & conditioned storage. “There’s no model discipline or speciality” says Scott. “Anything from a 60’s Élan to the latest Evora carries the right badge, the right interest, and all the essential ingredients of handling, performance and style. I often struggle to decide on a favourite!” And there are a few favourites within the Dorking facility.

There are three S1 Esprits, a Sport 350, a GT3, an S2 and a 78 Elite that’s a working project . “I love the third gen cars, as the and the cars were so stylish often bereft of aerodynamic nonsense and full of styling purity. Admittedly they all got a lot better as time went on – the last V8’s are still spectacular”.

There’s also many Elise, and Exige, plus a pair of 211’s, including a JPS example owned by Scott. “2-Eleven is the true embodiment of much of Colin Chapman’s engineering thought process. I’d like to think that he’d give the car a huge thumbs up. They work so well, are mind blowingly fast in all their dynamics and are painless to own – though I admit to liking them more when it’s dry!

Elise though is another car that’s special to Scott. “ The type 111’s were terrific to sell let alone drive then, but they are still great now, and nice examples can be had for around £9000; it’s an affordable dream for many and will never really break the bank to run. The factory never made a bad one – they are all fabulous in their own right. I’ve done huge miles in these and never once suffered a letdown”.

Evora also features strongly, with no less than five immaculate examples, beautifully prepared. “Evora is a fantastic car. The press raved about it in 2009, and still do so today. As a used car it’s a fantastic buy – I’ve a used one with all the right bits and only 2500 miles at under £45000 – that’s enormous value and a great used car buy.”

Pushing Scott for a favourite is hard; “For years it was an Esprit S1. I own an early example and it just looks beautiful, stunning, really. The only other car that stirs the same emotion is the new Esprit. I love everything about its styling, and it’s spec on paper. I want to own one…badly! And of the future? “Well, Lotus attracts new buyers every year. There’s always a fresh rush of clients plus of course many existing owners merge into friends and repeat sales. Couple this to the momentum at Hethel at the moment in Motorsport and in the very clever rebranding of the marque and the future for the Green & Yellow looks fantastic. I’d like to be a part of it for a long time to come.”

Scott Walker’s can be contacted on [email protected] or have a look at his existing stock on The Lotus Forums Classifieds section.