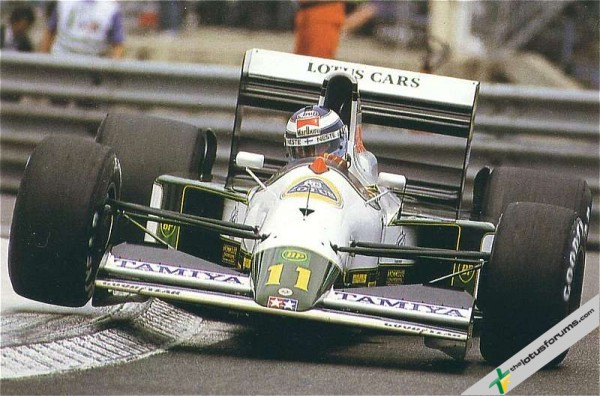 With the naming dispute between Group Lotus and Team Lotus now due to be held before the season opener in Australia, it’s worth recalling that twenty years ago this week a different incarnation of Team Lotus competed in its first Grand Prix since being saved by a consortium headed by Peter Collins and Peter Wright.

With the immediate post-Chapman years unable to repeat earlier successes with Ayrton Senna at the wheel, the Brazilian moved to McLaren and promptly won his first World Championship.  His replacement Nelson Piquet was unable to even score victories and Honda soon left, followed by the number one driver a year later.  In 1990 a promising Martin Donnelly suffered a terrible accident when his suspension failed and a disillusioned Derek Warwick left, as did long-term sponsor Camel, reuniting with Piquet at Benetton.  Peter Warr and Gerard Ducarouge had long since quit and even the legendary Tony Rudd was unable to keep the ship afloat.  Enter the rescue package after a winter of uncertainty.

Group Lotus were in the middle of an ultimately unsuccessful tenure as part of the General Motors group, although this did produce the Vauxhall/Opel Lotus junior single-seater series, from which Team Lotus’ new driver Mika Hakkinen had graduated, on his way to becoming British Formula 3 Champion.  He was to be paired with Donnelly’s old friend Julian Bailey, the first Briton to win a Formula 3000 race, with F1 experience limited to a year with Tyrrell that yielded little in the way of results.  The drive was also funded by Bailey, a move that betrayed the team’s severe lack of finances.

A sparsely-liveried and heavily updated Lotus Type 102 was converted from Lamborghini V12 to Judd V8 power and Hakkinen hustled it round the point-and-squirt Phoenix circuit to qualify in an excellent 13th place for his début Grand Prix.  Bailey was less successful, languishing among the 4 non-qualifiers.  In a world adjusting to recession, the economic cull of teams was yet to take effect, meaning that 34 cars filled the pitlane, eight of which would be destined not to see the start.

Hakkinen’s debut lasted 59 laps, a detached steering wheel gave him reason to pit on lap 8, not before a spin, and despite recovering to 12th place, a broken oil union ended his race.  But it had been enough to keep him on the radar.   Two races later at Imola the team celebrated a double points finish, Hakkinen and Bailey crossing the line in 5th and 6th places respectively, the latter having qualified for the first time that year and after a qualifying session that saw the pair on the back row of the grid.  But that was it in terms of results.  Bailey was replaced by test driver Johnny Herbert, a favourite of Collins’ from his days at Benetton, however in a season of many DNFs, any finishes were far down the order.  Hakkinen even failed to qualify in France.  A near miss for Herbert, 7th in Belgium, was as close as they got and with Japanese F3000 commitments, was replaced in several races by future DTM competitor Michael Bartels, not that he ever reached the grid.

That year the World Championship was fought over by ex-Lotus graduates Ayrton Senna and Nigel Mansell.  The former prevailed but Mansell got his revenge in 1992, a year when Team Lotus built upon their progress to gain respectability, with Hakkinen showing enough potential to be invited to join McLaren.  They would, in time, bring him two World Championships.  Herbert, too, was on the up and would go on to score victories with Benetton and Stewart but only after he became currency to the team, desperate once again for survival just two years later, accelerated by the increases in costs that followed technological advances in the sport.  The main one, active suspension, ironically pioneered by the team.  By then Senna had been killed at Imola and Mansell provided Williams and Renault with a bankable star.  However for Team Lotus this time there was to be no rescue plan, the team entering Administration and eventually bought by David Hunt.  His sale of the name to Tony Fernandes is, of course, central to the forthcoming legal proceedings.