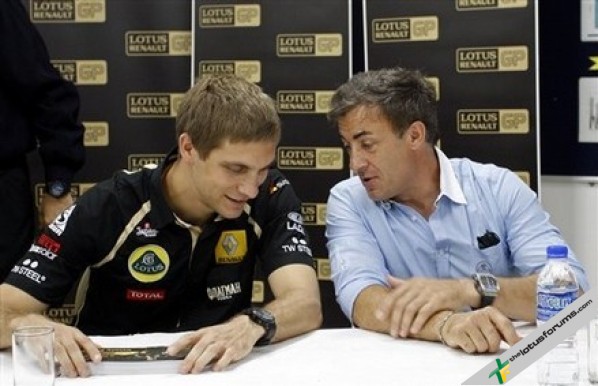 Jean Alesi gives us his thoughts on the Canadian Grand Prix

What an insane race. Jean, you were there in Canada getting soaked with Colin Farrell in the LRGP paddock. Were you able to keep up with what was going on?

Just about. Everyone was very impatient to get the race back underway when the red flags were out, and for a while it seemed a pretty boring afternoon at the track. But how wrong is that? The race, when it got re-started, was absolutely incredible. It was correct to wait, for the conditions that brought out the red flags were appalling. The drivers did a great job in difficult circumstances all afternoon, and our family – Lotus-Renault GP – were especially happy with the progress we were making. It was a great disappointment that Nick [Heidfeld] had a crash with [Kamui] Kobayashi towards the end. It was a shame for us as both cars were in strong points-earning positions.

Having dislodged the front wing, it folded underneath Nick’s car launching it upwards, and the whole thing nearly took off like an aeroplane. That could have been quite nasty, couldn’t it?

He was just a passenger. From the moment these cars lose their front wing they have no control and, indeed, Nick was fortunate to keep heading straight down an escape road where, once the tyres reconnected with the road, he was able to scrub off his speed. Yes, he was lucky to only lose points.

Fifth place for Vitaly Petrov. His was a very controlled race, despite the madness surrounding him, was it not?

A fantastic performance. With five safety cars there were many opportunities to have a nap and lose places, but every time Vitaly was on the ball and pushing forward. As I say, the conditions were very tricky, with a bone dry racing line and deep water offline. Felipe Massa managed to get it wrong, but Vitaly was error free.

Action right from the outset involving the McLarens. Who, in your opinion, was to blame for the contact between Jenson Button and Lewis Hamilton?

Well it wasn’t 50/50. Lewis had his nose up the inside and Jenson didn’t give him enough room. But knowing Jenson and how fair he is, this was not intentional. He didn’t mean to put Lewis in the wall. Jenson drove an astounding second half. The way in which he recovered from 21st to 1st, on the penultimate lap, was stunning – everyone was impressed. I’m pleased the stewards let the result stand.

Obviously Canada is very close to your heart, having taken your memorable grand prix victory here in 1995. It always provides drama, doesn’t it?

It’s guaranteed. This is a circuit built for racing and the grands prix are always hugely entertaining. Plus, the crowds are so enthusiastic, the whole city celebrates F1 all week with street parties and things. I just love coming here. Michael Schumacher is having a party right now – can you hear the firecrackers? It’s a fun end to a great day.