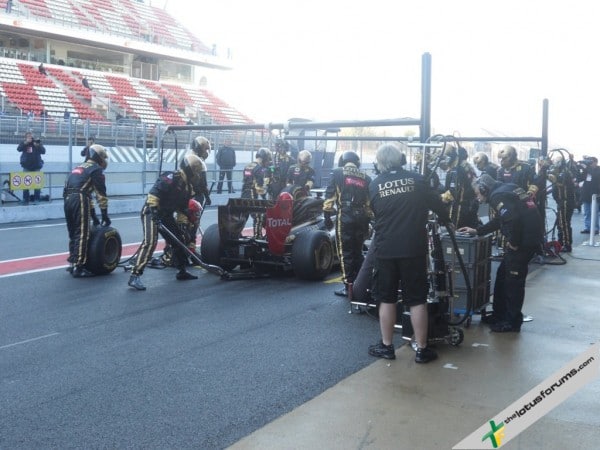 Nick and Vitaly got behind the wheel of the R31 today in Barcelona. Despite a problem with the KERS, which took most of the day to solve and prevented the team from completing its scheduled programme, both drivers managed some useful pit stops practice.

What we learned today:
– The team got up to speed with a new traffic light system for use in pit stops. This has been developed over the last year and the plan is to use it at the first race.

Nick: “I was in the car for just an hour this morning to do some pit stop practice. It was a bit damp to begin with, so we started on the wet tyres and I got my first feel for them. I didn’t do a proper run, just one timed lap and then came in and out for pit stops. It was the first time I have used the new traffic light system and it worked okay, but we found some small things to improve for next time.”

Vitaly: “A difficult day for us because we lost a lot of time finding the problem with the KERS, but at least I got out for the final 40 minutes so that we could do the practice pit stops with our new lighting system. Because we didn’t manage to do much running today, the team will give me some more time in the car tomorrow morning before Nick takes over.”

– Our day was blighted by a KERS problem, which was quite difficult to understand. However, we eventually solved the issue and, as a result, we have learned quite a lot. We’re confident we won’t face these problems again.

– On the positive side, we did complete our pit stop practice with Nick, Vitaly and all the mechanics from the race team.

Did You Know?
During racing conditions, the car’s clutch can reach temperatures of up to 500 degrees Celsius.