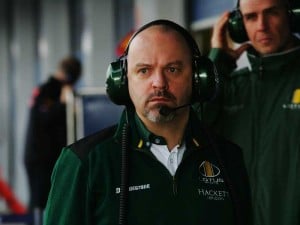 In a strong statement of intent about the aspirations of Lotus Racing, soon to become Team Lotus, an announcement has been made today that Chief Technical Officer Mike Gascoyne has signed a five year deal, tying him to the Anglo / Malaysian squad until at least 2015.

Under Mike’s technical direction, Lotus Racing has gone from confirmation of its entry to the 2010 FIA Formula One™ World Championship in September 2009 to its current position of tenth, and is now forging ahead with its 2011 car which will be raced under the Team Lotus name.

Mike Gascoyne “Having started the team from scratch with Tony it was always my intention to finish my career here, so it’s great to have formally agreed a five year deal. I’d like to extend my sincere thanks to Tony, Din, Nasa, Riad and the whole team, and I’m extremely grateful to everyone involved in Lotus Racing for having the confidence to take this into a long-term contract. We’ve had a great start to our partnership together, and I’m looking forward to continuing that for the next five years, and even beyond that.”

Team Principal Tony Fernandes couldn’t hide his delight at securing a long-term deal with Mike, saying “Mike’s five year deal is a major announcement for the whole Lotus Racing team. It shows just how serious we are, not only about how far ahead we are setting our aspirations, but also as a reward to Mike for the incredibly hard work he and the team have already put in to get us from literally four people back in September ’09 to our current position as a serious F1™ player with a very bright future ahead of us. On a personal level, I’ve really enjoyed the last year that we’ve been working together, and I’m very excited about working with Mike for many years to come.”

Mike Gascoyne is one of the Formula 1’s most renowned technicians and has carved out an illustrious career at the pinnacle of international motorsport over the last two decades.

Having studied for a Ph. D in fluid dynamics at Cambridge University throughout the 1980s, Mike’s passion for motorsport took him into the world of Formula 1 for the first time in 1989 when he joined the McLaren team as an aerodynamicist.

At the turn of the 1990s, Mike took up a brief sojourn as Chassis Dynamicist at Tyrrell working under famed designer Harvey Postlethwaite, which led to a three-year post as Head of Aerodynamics at Sauber, where he stayed until 1993.

The following season saw Mike return to the Tyrrell team in the more senior role of Deputy Technical Director, a position he held until the team’s demise in 1998.

That year, Mike joined the Jordan Grand Prix team as Technical Director and led the team to its most successful season ever in 1999 with two race victories, six podiums and third place in the constructors’ championship.

After a disappointing 2000 season, Mike joined the Benetton team, which was to become Renault in 2002. In his Technical Director capacity, Mike transformed the team into a winning operation, taking Renault to its debut victory in the 2003 Hungarian Grand Prix.

Having established himself as a man capable of turning around team fortunes, Mike was snapped up by the relatively new Toyota team at the end of 2003. Although unable to have much impact on its 2004 challenger, Mike set about developing the team’s 2005 race car. The Cologne-based squad enjoyed its most competitive year in Formula 1 that season with five trips to the podium and an overall fourth place in the constructors’ championship.

A disappointing start to 2006 saw Mike move back to the UK to become Chief Technology Officer for the Spyker F1 team in time for the 2007 season in which the team was to sensationally lead a rain-hit European Grand Prix. In 2008, Spyker was taken over and renamed Force India with Mike retaining his role. The highlight of that year was seeing team driver Adrian Sutil running in a competitive fourth place in the Monaco GP before after another driver crashed into him just seven laps from the end of the race.

After leaving Force India before the 2009 season, Mike is now making his Formula 1 return with Lotus Racing as Chief Technical Officer with the Malaysian team preparing for its debut season in the sport in 2010.

One year in the life of Lotus Racing