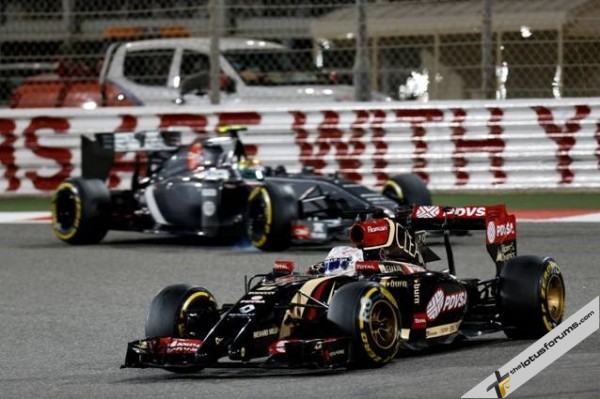 As the sun set on the desert kingdom of Bahrain, The Lotus F1 Team went to battle, and a challenge it was.  With Romain starting 16th on the grid and Pastor 17th, it was never going to be an easy task. Yet, once again the team unified, and attacked the job with gusto.

Staving off competition, they managed to gain several places and halfway through the 57-lap race, Romain was running in P15 and Pastor in P12. A later collision for Pastor Maldonado saw him pick up a 10 second stop-and-go penalty and a 5-place grid penalty which will be applied during the next round of the 2014 F1® Championship in China. A disappointing end for the team, as both cars took the chequered flag this time around. Romain finished in P12 and Pastor P14.

Romain Grosjean P12 E22-03:  “It’s good that we didn’t have any problems during the weekend and we were able to finish the race with both cars. It’s not easy racing – what with the fuel management and energy recovery system – so there’s certainly more mental work going on in the cockpit. At certain points of the race we were quite quick, but then at other points we were really struggling with the rear grip. Fortunately, we now have two days of testing at Bahrain so we’ll be able to try a lot of different set-ups to try to get the car more as we want it.”

Pastor Maldonado P14 E22-01: “As we expected the pace was much better in the race than it was in qualifying. We were using quite an interesting strategy and were running on two stops which was working well until the incident. We will need to have a look again at what happened as Esteban seemed to be off his line coming into turn one – maybe he missed his braking point, I don’t know – and by then I was in the corner with nowhere to go. For sure it’s difficult to understand and I was coming out from the pits and with cold tyres. I think he was very unlucky and it’s good he jumped straight out of the car. As a team it’s a plus that we finished with two cars which is very important and now we need to learn from this race and push hard for Shanghai.”

Frederico Gastaldi, Deputy Team Principal: “Both drivers kept their heads down and kept pushing today. It’s clear we still have to unlock a lot of pace from this car, but we were much better with reliability here and our relative pace has improved too. It was good to see both cars at the finish of the race as this is what we need to improve the car and make it faster.”