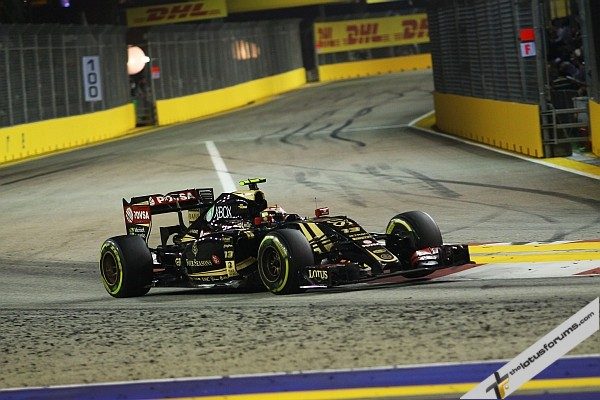 Lotus F1 Team fought a tough Singapore Grand Prix with Pastor Maldonado finishing twelfth and Romain Grosjean classified thirteenth. Romain was able to feature strongly in the top ten for much of the race, but diminishing tyre performance late on meant a better finish was not possible. Pastor sustained damage to his car after contact from Jenson Button’s car which blunted his late-race performance.

Romain Grosjean, P13, E23-04
“We had an aggressive strategy planned for today, which looked good since we were as high as P8 at one point but the first virtual safety car cost us dearly. I lost a lot of places on the first lap, there was quite a lot of sliding going on and, as we knew this wouldn’t be a great track for us – like Hungary and Monaco – we knew it would be difficult. There was nothing left in the tyres towards the end of the race and as soon as we were out of the points, we chose to retire the car as we had some concerns with the gearbox and didn’t want to risk a penalty in Japan.”

Pastor Maldonado, P12, E23-03
“It was a really difficult race. The contact from the McLaren was small but enough to break my diffuser. I was defending on the inside and I don’t know where Jenson wanted to overtake me. It’s a very narrow corner where it happened and there was no chance for him to overtake. The damage meant we lost performance at the rear at the time in the race when we wanted to preserve tyre life. Sadly it wasn’t possible to maintain the pace and the tyres so we had to make an additional, unplanned stop.”

Federico Gastaldi, Deputy Team Principal
“We scored no points today but we certainly fought hard. It’s a long, hot and humid race so thanks to Pastor and Romain for pushing to the maximum for every lap. Everyone in the team has been working hard all week so it’s frustrating for all of us when we fall short of the points. We’re certainly focused on a better result in Japan.”

Nick Chester, Technical Director
“That was a long tough race for us. Romain lost positions at the start so we brought forward his stops to undercut and gain track position. Unfortunately this meant we missed out on a quick pit stop under the virtual safety car at the first stop. We suffered worse tyre degradation than expected on Romain’s final stint which cost us in the last few laps. Pastor made up positions from his start but was compromised later on after the damage sustained from Jenson. We are now looking forward to Suzuka.”

Points for Pastor in Austrian GP