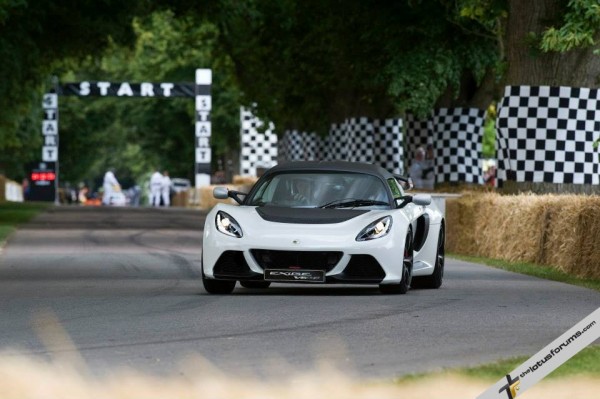 After 2 years of very substantial investment at the Goodwood Festival of Speed Lotus had a more modest stand presence for 2014 and decided to let the cars do the talking instead. On the Lotus stand, staff were kept busy with enthusiasts for the whole event with a lot of the interest focussed on the recently launched Exige LF1. Also on the stand was an Evora Sports Racer in stunning Daytona Blue and Elise S in Chrome Orange. The show stealer however was the hillclimb on Saturday afternoon with Lotus’s Matt Becker putting in a huge drive to secure 5th fastest in the Exige Cup, ahead of some very powerful and expensive machinery including the 720bhp, £849k Pagani Huayra.

“We are absolutely delighted with the Exige Cup’s performance on the hill which showed its true ‘pounds vs performance’ credentials and we consider the car the winner of the weekend with that run. Lotus were also very happy with the reception for the Exige LF1 and are happy to be able to support our home market at the Festival of Speed.”

If you couldn’t make it, some images below. Click on any to enlarge into the gallery.

[PICS] Lotus at the 2021 Goodwood Festival of Speed

[PICS] Lotus at the 2019 Goodwood Festival of Speed

[PICS] Lotus at the 2018 Goodwood Festival of Speed

Lotus at the 2017 Goodwood Festival of Speed