Much has been written over the last few weeks on the Lotus vs Lotus F1 team name dispute, both by the protagonists and external commentators including myself.  The vast majority assume that it would be impossible for 2 Lotus F1 teams to co-exist. Apparently, the fans would be too confused.  History tells us different.

So, how easily are the fans confused?  Did Honda becoming Brawn, becoming Mercedes turn away confused fans? No, it added to the backstory and created news and interest in the sport.

Does the co-existence of Red Bull and Toro Rosso confuse the fans? Well, arguably, the similar livery occasionally causes mistakes by TV commentators and viewers, but no more than that. So why not “Team Lotus” and “Equipe Lotus”?

There has often been more than one Lotus team in F1. The first Lotus F1 victory by Stirling Moss was in a privately entered Rob Walker dark blue Lotus, not a green works car i.e. we had 2 teams of Lotus cars in F1, each easily distinguished by the fans. There were no concerns from the Lotus Company about what a “Rob Walker Lotus” was doing to their “brand values”, probably because it was enhancing them.

Who can forget the 1968 British GP at Silverstone? (If you weren’t born then, or need a reminder, click here ) No fan was confused by the Rob Walker Lotus 49 (dark blue with a white hoop) of Jo Siffert winning after the works Gold Leaf Team Lotus cars (red, white & gold) retired. 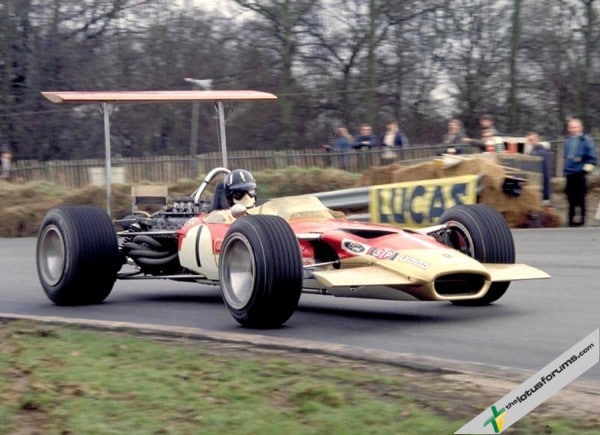 There are plenty of “traditional” Lotus colours to choose from to ensure the 2 teams don’t look too similar, including –

Either a High Court judge can decide how these 2 overlapping trademarks can or can’t co-exist or Mr. Fernandes and Mr. Bahar can come to a mutually beneficial arrangement between themselves. I believe that having 2 Lotus F1 teams, pushing each other forward through healthy competition is the best way to raise the profile of the Lotus brand worldwide.  Lotus would get more media coverage than McLaren and Red Bull put together.

And how about a side bet between Tony Fernandes & Dany Bahar, like the one with Richard Branson? Any suggestions for what the forfeit should be?