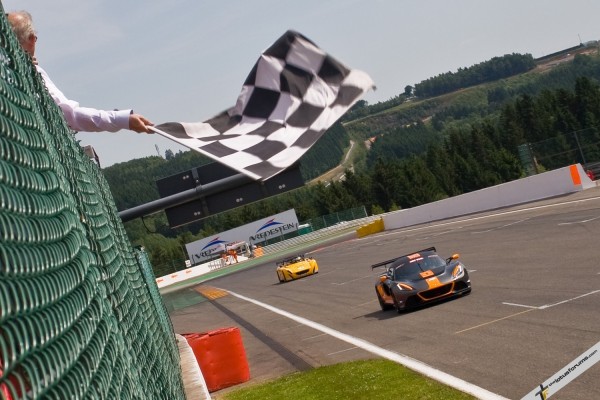 A spin at the Bus Stop chicane on the final lap of the second Lotus Cup Europe race at Spa-Francorchamps was the only blot on Jérémy Lourenço’s copybook this weekend (10-11 July). Whether or not it was down to exuberance, the reigning champion had reason to celebrate a perfect score at an event where many of his rivals lost ground in the title fight.

The opening race was interrupted by several incidents, starting at La Source on lap one, which took potential winners Nikolaj Ipsen, Gregory Rasse and Philippe Loup out of contention. When Production category challenger David McInulty spun into the barriers at Eau Rouge whilst battling double class winner John Rasse, the safety car was called into action.

When the race was resumed, Jon Walker took second place from Xavier Georges, but before he could work on a strategy to take the lead, the safety car returned to the track. With Kees Versluys’ Elise having collected a spinning Jean Potier, the resultant clear-up meant that the race finished under yellow flags. Last corner spin aside, the second race was a much more straightforward affair for the leader, who had opened up a 30-second gap over eventual runner-up Thierry Verhiest. Georges recovered to third place after a slow start, whilst Nicolas Ferrer completed a double Open class victory just behind.

Jean-Baptiste Loup also took a pair of class victories in the 2-Eleven category, the second after a race-long fight with Jon Packer, Christophe Lisandre, and Andrew Wright, the latter of whom was unable to complete the distance.

Lourenço’s double makes him the most likely challenger to John Rasse, who has won every race in his class so far this season.

The next round of Lotus Cup Europe will take place at Brands Hatch on 15/16 August at the Lotus Festival.