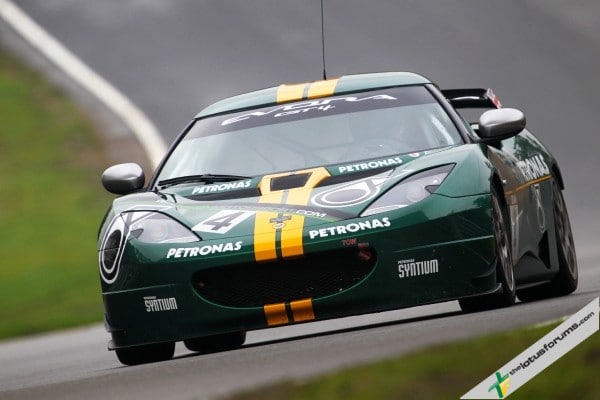 Gavan Kershaw and Stuart Hall have won the second Lotus 1000km, driving a Strattons-run Evora. Whilst the team were favourites for victory, they were pushed all the way by last year’s pacesetters GWS. The thirstier V6 was barely three minutes ahead of the challenging Exige and potentially required an extra stop before the 515-lap distance was completed. However when Jamie Stanley brought the GWS car in for an unscheduled stop in the final hour and was unable to resume battle, the matter was settled.

This left Doug and Chris Setters, plus Chris Headlam in the Combat Laser Games Exige to take second, whilst the leading Elise Trophy class car took the final podium position. Witham Cars Japan’s line-up of Adam Bewsey, Dan Plant and Yuji Shinohara defeated LaHay racing’s John LaMaster, David Hay and Steve Williams by just seven seconds after more than eight hours of racing and they shared several battles out on track. The moment was particularly sweet for Shinohara, who had flown from Japan to compete.

Last year’s winning entry, which included Paul O’Neill on the driving strength, failed to make the start following gearbox failure, whilst a storming series of laps from Nick Tandy in the pole-sitting Europa came to nought after gear linkage troubles left them in the garage for many laps. His team’s race was more successful than fellow front-row starters Hofmann’s Motorsport, their Europa retiring early after refuelling flash fires indicated an incurable problem. However, 16 of the 24 starters were classified at the finish, with many more running at the end of the race.