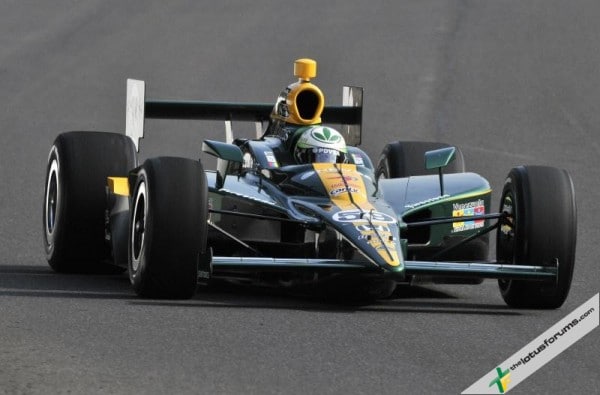 SPEEDWAY, IN – MAY 29, 2011 – KV Racing Technology – Lotus driver Tony Kanaan finished fourth in the 100th anniversary running of the Indianapolis 500 at the Indianapolis Motor Speedway in Speedway, Indiana. Teammates E. J. Viso and Takuma Sato were the victims in separate incidents and placed 32nd and 33rd respectively.

Tony Kanaan, No. 82 GEICO – KV Racing Technology – Lotus, started 22nd on the historic 2.5-mile superspeedway oval, however, on a day in which he would be officially credited with passing 18 cars, but in reality was easily double that amount, was on the move on the drop of the green flag.  On lap 60 he was running sixth when he came down pit lane for a stop, only to have another car get waved out in front of him forcing him to overshoot his pit.  When he finally returned to the track he was in 24th position.  Furious, but undeterred, Kanaan worked all the way back through the field, getting as high as second, before making his final pit stop on lap 179 which dropped him back to 10th.  Over the final 21 laps he passed an additional six cars to earn his highest finish at the Speedway in five years.

“This is unbelievable,” Kanaan said. “First I’ve got to thank my KV Racing Technology guys for the great car, great strategy and great stops.  Also I want to thank my sponsors, GEICO and Lotus for being here.  Even having the problem when the Conquest guys sent Pippa out right in front of me, we still could get our car up there again. I lost count of the cars I overtook during the race going from 22nd to fifth to 24th to fourth… Man, I had a lot of fun!  I love this place, the fans, everything and that’s what keeps bringing me back every year.”

Kanaan made his 10th start at the Brickyard today.  He has now finished in the top-eight five times and in the top-five four times with a best showing of second in 2004.  Kanaan has also led 214 laps at IMS and is the only driver to lead laps in his first seven Indy 500 races. Last year starting last and finishing 11th was one of Kanaan’s most impressive performances here, but today’s effort ranks among the best performances ever.  The 36-year-old Brazilian who is in his 14th U. S. based open wheel season and 10th IndyCar season has been extremely impressive opening the 2011 IndyCar Series season.  He has now finished in the top-10 in four of the first five races with two top-five showings and a podium performance (third at St. Petersburg).  He has officially picked up a total of 43 positions (starting spot to finishing spot) on the track in five races.  Kanaan earned 36 points today and is now fourth in the championship standings with 135 points.

E. J. Viso, No. 59 PDVSA – KV Racing Technology – Lotus, started 18th, his best qualifying position in four races at IMS, and was also on the move from the drop of the green flag picking up five places in the first 21 laps.  However, following the restart after the first of seven caution flags today, he was hit from behind, spun and made contact with the wall damaging his car beyond repair.

“It was a restart,” Viso said. “I was running with Graham (Rahal) and (James) Hinchcliffe and I don’t know if Hinchcliffe missed a gear or something, but he lost his momentum coming out of turn four.  Rahal went to the inside and I went to the outside as we were approaching turn one and I got hit in the left rear tire and spun.  It had nothing to do with the double file restart, he hesitated and then I got hit in the rear.”

Viso has been plagued by bad luck this season.  His tire was punctured in St. Petersburg, he was hit from behind at Barber, had contact while trying to make a pass at Long Beach then in Brazil it looked like his luck was changing when he placed 13th in horrible weather conditions, but today it seemed to be some of the same old misfortune.  The 26-year-old Venezuelan is 20th in the standings with 65 points,

Takuma Sato, No. 5 MonaVie – KV Racing Technology – Lotus, appearing in his second Indy 500 started 10th following an impressive qualifying performance.  He lost a little ground early in the race, but was clearly settling in and working with his car when on lap 20 his car slid up into the wall when another got underneath him and he lifted to avoid contact.

“I started in a strong position 10th on the grid, which was going to give me a good opportunity in the race.  After the start, I struggled a bit, but I was sure that we could improve the balance of the car during the race.  I settled into a good rhythm.  However, communication between the driver and the spotter is fundamental in oval racing. Today we had a communication problem and I was not informed that there was a car approaching my inside line.  I was already into turn one at full speed when I was told the car was there.  I had to lift and my car washed out.  I am very disappointed because I felt we could have performed well here today.”

In his only other appearance at the Brickyard, last year, the 34-year-old from Japan struggled in qualifying and started 31st, but had a strong race getting into the top-10 before he had a problem in the pits and ended up finishing 20th.  Sato opened the 2011 season strong, finishing an IndyCar career high fifth in the season opener at St. Petersburg before having strong performances at Barber and Long Beach nullified by late race incidents.  In Brazil, he had a breakout performance leading 23 laps, his first in an Indy car, before he was forced to pit for a splash of fuel and finished eighth.  Sato, who earned the Firestone Tire-rific award for his performance in Brazil, is 14th in the standings with 94 points.

Todays fourth and eighth place finishes are the best for KVRT in four races at the Indianapolis Motor Speedway (total of 12 starts).  The team made its first appearance at the Speedway following unification in 2008 with a two car effort.  In 2009, KVRT fielded three cars with Townsend Bell finishing fourth and Paul Tracy placing ninth.  In 2010 the KVRT tried to qualify four cars, but fell short with Tracy failing to make the field.  This year KVRT had four cars in the race.  In addition to the three KVRT – Lotus cars KV Racing Technology also fielded a fourth car under the KVRT – SH Racing banner with Indy veteran Tomas Scheckter behind the wheel drove to an eighth place finish.

Next up for KVRT is the Firestone Twin 275s at Texas Motor Speedway in Ft. Worth, Texas.  The races will be broadcast live on Versus at 8:00 p.m. ET

Jean Alesi to race for Lotus in Indy 500

10th place for Sato in Japan

Podium for Kanaan in Indycar