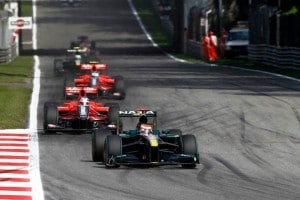 Lotus Racing will move on to the Singapore Grand Prix having had a strong weekend that unfortunately did not repay the team with the race result they had hoped for. Heikki Kovalainen finished the race in 18th and Jarno Trulli recorded a DNF. Jarno had made a good start and was comfortably leading the other new teams until a gearbox failure on the 46th lap forced him to pull over.

Heikki Kovalainen (Chassis T127-01) 18th, fastest lap 1.27.822 – lap 50, 1 stop – lap 23: “I lost a few positions at the start, managed to get in front of di Grassi but then was stuck behind Timo. I didn’t have the straight line speed to get past him so didn’t have the chance to make a move. It’s a shame because I couldn’t get the true potential out of the car after a good weekend, but that’s life. We haven’t lost anything in terms of the Championship so all in all it’s not too disappointing.”

Jarno Trulli (Chassis T127-04) DNF, fastest lap 1.29.017 – lap 30, 1 stop – lap 25: “It was a very good race until the gearbox problem meant I had to stop. I lost second gear and even though I continued running without second, it gave up completely which ended the race. But I must say that the race had been very satisfying until that point. I was pulling away from Timo and the guys behind and was increasing the lead with every lap, and the car felt great right from the start. But this seems to be the story of the season – we’ll go to Singapore and hope my luck improves there.”

Dieter Gass, Sporting Director: “A bit of an unfortunate race today after a strong weekend. Heikki lost position at the start – he managed to pass di Grassi but couldn’t get past Timo after a good fight. Jarno had a strong race until we ran into gearbox trouble. He lost second, then the whole gearbox, which brought his race to an end. Now we move on to Singapore and we’ll fight back there.”

Tony Fernandes, Team Principal: “One has to be philosophical after today’s race, and focus on the fact we had a very good weekend. It’s obviously disappointing that we had yet another gearbox failure on Jarno’s car as he was comfortably pulling away from his nearest rivals until he had to pull over. Heikki had an unfortunate start, and that meant his whole race was compromised as he was stuck behind Timo and couldn’t pass. Despite that, it’s been a good weekend for the team. We’ve made some important decisions about next year, and we’ll build on what we’ve learnt here and come back fighting.”

D’Ambrosio in for Grosjean at Monza

One year in the life of Lotus Racing