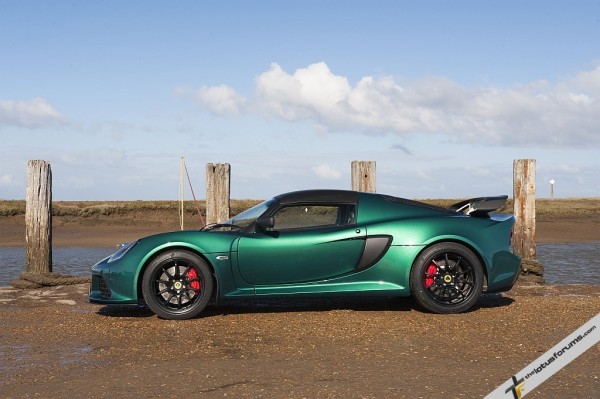 Here’s the thing. The new Exige Sport 350 looks annoyingly good value to a proud V6 Cup owner. The general gist of the new car is ‘Cup’ performance for ‘S’ money, all achieved through weight reduction. The original quoted weight of the V6 Cup was 1110kg (without aircon) and the Sport 350, in its lightest spec (also without aircon), is quoted at just 1115kg. Time to order a lightweight battery methinks! Confusingly, the claimed weight for the new 360 Cup is 1130kg. If ‘light is right’, it looks like the production engineers have just beaten Motorsport at their own game. Leaving that aside for a moment, the black Sport 350 we drove on track was representative of this ultimate lightweight spec, so will form the basis of this comparison. 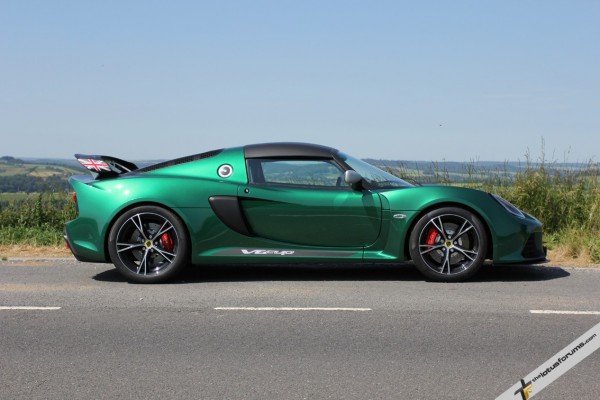 On the road, the Sport 350 offers some clear advantages over a Cup spec car. NVH (Noise, Vibration and Harshness) is reduced, the damping is better set-up for road use at road speeds, the steering is less busy and the new gearshift is shorter throw and more precise. The longer the journey, the more you will appreciate these things. The V6 Cup remains the more raw car which has an appeal of its own on shorter road trips. It’s more memorable, more communicative and has a greater sense of occasion when you’re in the mood, but can become a bit more tiresome when you’re not. The performance of both cars can often feel surplus to requirements on the road and the Sport 350, with its extra creature comforts, is a better choice for driving at a more relaxed pace. For whatever reason, the Sport 350 felt more torquey in the mid-range but not quite as sharp as the Cup after 6,000rpm. This could be down to a tighter engine that will no doubt loosen up with more miles. However, this is a familiar impression for me, having driven a number of Exige S’s before. They always feel very strong and muscular but not quite as feral at high revs. If the weight of the Sport 350 is near-as-dammit identical to my V6 Cup, it doesn’t feel it. However, the impression of a car’s weight is easy to confuse. The Sport 350 feels more solid inside, you are a little more isolated from engine and wind noise, the damping is different and the more chunky steering wheel wriggles around less in your hands. This feeling of solidity can be easily mistaken for extra weight. I’m making a meal about a small real-world difference here, but the V6 Cup sounds and feels almost hollow in comparison. Stones tinkle around the ally tub and when the supercharger whines, it feels like like a crisp packet being blown down the road by a gale. I know from first-hand experience that there’s very little between a V6 Cup and an Exige S in a straight line, so it’s best to move on to how the cars corner. The steering on the Cup is more ‘chatty’ than the Sport 350 which feels higher geared, even though it isn’t. The turn-in is electric in the new car, certainly quicker than the old ’S’, possibly a shade quicker than the Cup too. However, the change from Pirelli P-Zero Corsa Trofeos to the stiffer sidewalled Avon ZZRs has improved turn-in with my Cup and I prefer the slightly more linear relationship between the steering and the nose of the car. The 350 feels very alert to the first few degrees of steering either side of dead centre and more like a regular Exige S at bigger steering angles. 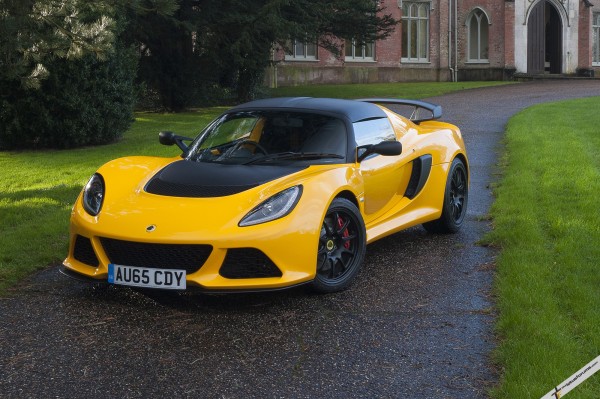 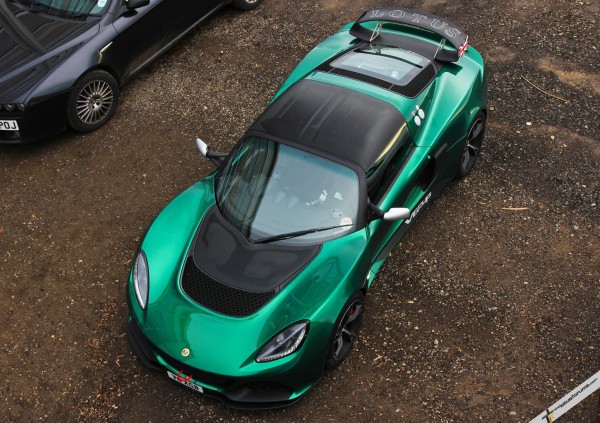 Perhaps I got lucky with my car but the gearshift has always been great – very fast, slick and precise. As a result, I’ve always struggled to understand the negative comments about the gearchange. However, there were some very real issues with the Exige S I drove at the Lotus Driving Academy. It has to be remembered that these cars endure the hardest life imaginable but the gearchange was sloppy, vague and often reluctant to engage 2nd gear without a graunch. Had I driven a car like that on my test drive I would have been forced to join-in the chorus of criticism online. The new Sport 350 gearshift looks terrific, an anodised aluminium work of art, and it’s great to use. It’s definitely shorter throw but firmer too. Where gears in the Cup can be changed with one finger (quite literally, I tried), the new car needs a positive push and pull. It’s more physical to use and arguably more involving, it feels stronger and more precise but I’m not convinced it shifts any faster. The low-friction motorsport grade cables in the older gear linkage can swap cogs really quickly. Overall, the Sport 350 linkage is development money well spent. 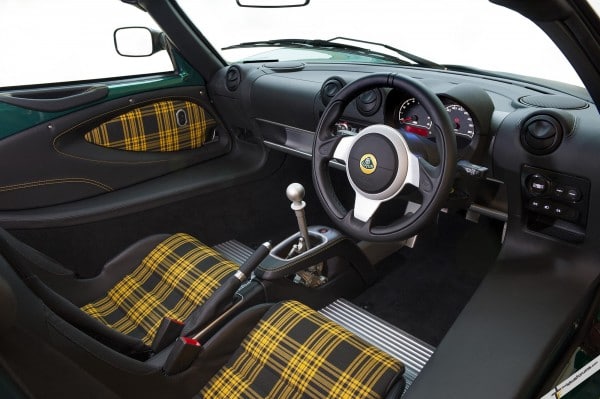 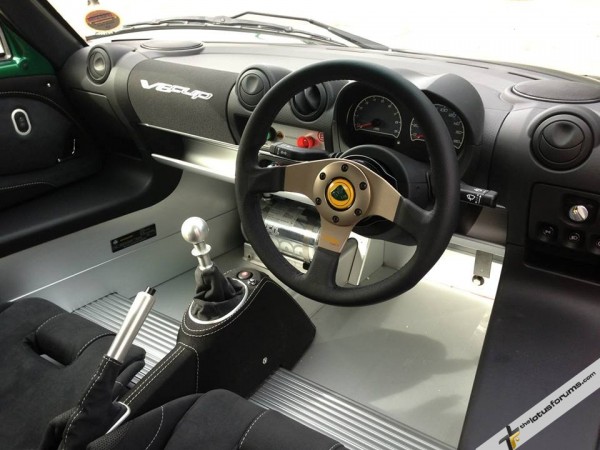 On the track, the V6 Cup always delivered more than just faster laptimes. The adjustable Nitrons feel more sophisticated and control the car’s mass even better, particularly in extremis. Roll and dive is supremely well-contained and the car remains composed right up to ten-tenths. The same peerless feedback that was so engaging on the road becomes a really valuable tool on the track. You can feel the onset of understeer and oversteer before the car actually deviates from your chosen line. Most sports cars let you know they are understeering when they’re running wide. In an Exige that tingle through the wheel to your fingertips is your early warning system. You are compelled to make small, fast, instinctive adjustments and away you go. With something like a Nissan GTR you take note of where it went wrong and try and do it better next time round. The same learning process takes place in the Exige in a single corner. A V6 Cup and a quiet trackday is an endlessly thrilling, challenging and rewarding combination.

The reduced mass feels very well controlled in the Sport 350 but it does feel a little softer than the Cup on the track. There are benefits to this, it can be hurled at kerbs with more reckless abandon for one. It doesn’t feel quite as quick over a lap but much of that, if not all, is down to the Corsa tyre I suspect. The 1.29.8 laptime Lotus has recorded is a very impressive 2.5 seconds faster than the Exige S could manage. That all but wipes out the V6 Cup’s official laptime advantage. According to Lotus, the Sport 350 actually has more aggressive suspension geometry than the Cup which officially shares the same geo with the Exige S. That will come as a surprise to anyone who’s driven a V6 Cup and whenever I see a Cup parked next to an Exige S, it’s pretty obvious that the Cup cars have a lower ride height. Then there’s the ability to adjust the Nitrons just to muddy the waters further. The owners I have spoken to who have added Nitrons to their Exige S tend to be effusive with praise about them. Regardless, if the Sport 350 can lap Hethel in under 1m30 you will be able to keep some pretty serious company on trackdays and do so all day long without any complaint from the immense brakes – a rare thing for a factory standard sports car even now. Given that the track is the only place you can fully enjoy a modern performance car, it makes a lot of sense to own one that excels in this area. In terms of a road and track compromise, the Sport 350 is deeply convincing.

To be able to keep the V6 Cup honest on the track while retaining much of the Exige S’s road manners is no small achievement. Then there’s the price. It’s a very compelling package for £55,900. Maybe not for someone who already owns an Exige S but it should be enough to tip some fence-sitters into action. I still think the Cup has the edge in communication, excitement and accuracy on track. There’s a touch more of the trademark Lotus delicacy to the steering and gearshift too. Given the choice of ‘just one more lap’ I’d still take the V6 Cup, even if the laptime was not much faster. But, well, I guess I would say that wouldn’t I? A touch here and smidge there doesn’t sound like much of a return for your £6k difference in base cost. To be fair to Lotus Motorsport, the lightest spec Sport 350 will cost closer to £60k while the V6 Cup starts at £62,995. Even so, an update of the V6 Cup is looking likely, some might say essential. 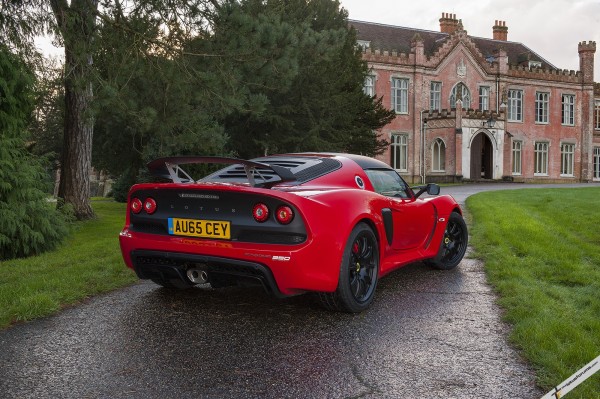 So where does this leave the 360 Cup? The weight figure is a bit perplexing but it doesn’t yet benefit from the weight saving measures such as the new gear linkage, lighter body panels and new rear subframe introduced with the Sport 350 (and shared with the 311). The 1130kg weight figure includes unusual stuff for a Cup car such as NVH material, the stereo and speaker system (7.5kg) and standard sports seats. The ultra-light (and very lovely) carbon race seats are now extra cost but will bring the weight back down if specified (and how could you not?). I suspect that the two Lotus development teams are just temporarily out of phase with each other. It would make sense to see the new gear linkage and forged wheels on the Cup cars soon and I for one can’t wait to see what Lotus Motorsport can do with a Sport 350 as the basis for a new track-focused car. Should be quite a weapon. Just ask any V6 Cup owner, whatever the on-paper stats say, the Motorsport cars are very special to drive. 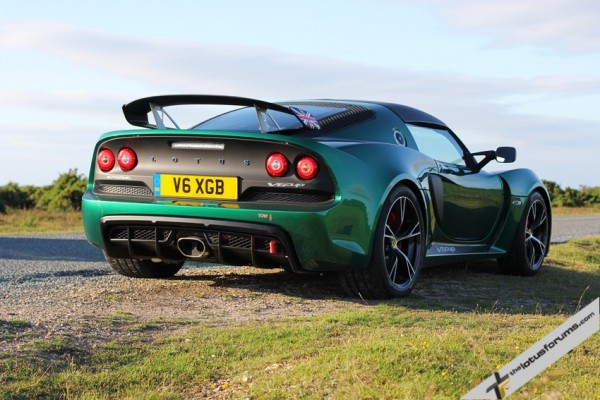 Exige Cup racer to be revealed at Lotus Festival