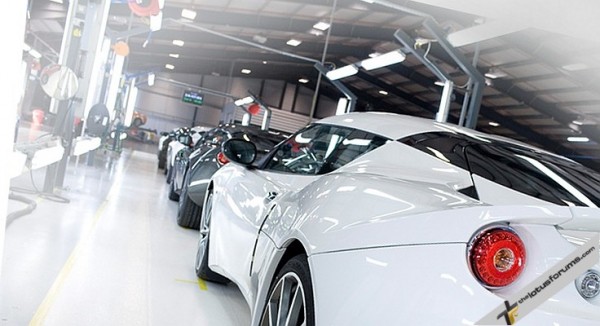 Figures recently released by the SMMT (Society of Motor Manufacturers and Traders) for new car registrations this year to date show Lotus making the most progress and growth in the UK. With a 56.91% increase year on year Lotus beat all others showing that they are back on track and building cars in significant numbers once again. Other major players in the report are Japanese manufacturers Mitsubishi and Suzuki who show a growth of 42% and 32% respectively and Saab and Proton bookend the other end of the report with a 98% and 90% reduction.

With the range now including the Elise S, Elise Club Racer, Elise Cup R, Exige S coupe & Roadster plus Cup and Cup R and Evora range from base model through Sports Racer to GT4 cars Lotus have a 4 month waiting time for road cars and 9 month waiting time for motorsport cars. With the UK dealer network sadly suffering the loss of Christopher Neil’s in Cheshire and Stratstone in Leicester this year the rest of the network has been working significantly harder and the figures reflect the effort put in across the country with strong figures from Murray Motor Company, Bell & Colvill and Lotus Silverstone leading the dealer tables for sales.

Lotus are again looking to return to the motor show scene worldwide recent appearances at the Guangzhou International Automobile Exhibition and LA Auto Show and signs are that the marketing efforts are back on track following a period or dormancy while new owners DRB-HiCom took stock of their acquisition and laid foundations for a solid future for the company. This is reinforced by the recent grant to Lotus from the Regional Growth Fund which could see over 300 new jobs created at the Hethel factory.