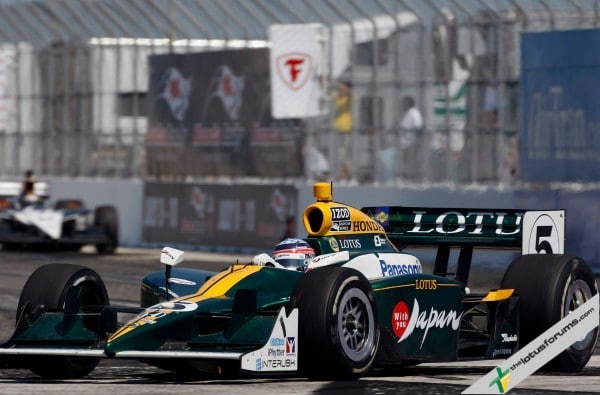 Kanaan made his KVRT – Lotus race debut a huge success by finishing on the podium.  No stranger to the challenging 1.8-mile, 14-turn St. Petersburg temporary street circuit, Kanaan, who was making his seventh start here, qualified eighth, but following a first lap accident that took out several other competitors, he moved into third place.  From there he challenged runner-up Will Power throughout the race and in the end held off a strong charge from Simona de Silvestro to earn KVRT – Lotus’ second IndyCar Series podium finish.

“I didn’t expect anything in this race and maybe that was a good thing because it makes todays result that much better.  I have to thank KV Racing Technology and Lotus team for giving me this opportunity.  I also have to thank my fans, my family and sponsors in Brazil that made this happen a week ago, in fact six days ago. I’m afraid I may have raised the bar a little too high too quickly, but I am happy.  We still have work to do, but today was a great result especially considering that the guys have only been together for less than a week.”

Kanaan has now finished in the top-10 in every race he has run at St. Petersburg placing in the top-five all but once including five podium performances.  His best showing is second in 2005.

Sato, No. 5 KV Racing Technology – Lotus, began his second IZOD IndyCar season and second with KVRT – Lotus today with the first top-five finish of his 18-race IndyCar career.   After qualifying 11th for the second time in two tries at St. Petersburg, Sato moved into sixth after the opening lap incident.  He dropped back a couple of places when under the new restart rules he lined up on the outside of the double file.  Sato, who drove a strong, smart race, passed several cars on track.  He also benefitted from some outstanding pit work from his KVRT – Lotus crew.

“This was a great way to start the season,”said Sato.  “It is my first top-five finish in the IndyCar series.  At the start of the race, I avoided the accident and gained some positions.  However, on the restart, unfortunately, I was always on the outside of the double file and it seems very difficult to gain positions from there……in fact I lost many.  But it was an exciting race.  I overtook a few cars on the track and the team did a fantastic job with the pit stops, so I got some of the positions back.  We still need to do a lot of work, but I am happy to start the season this way.”

Viso, No. 59 PDVSA – KV Racing Technology – Lotus, driving for KVRT for a second season, but first in the Lotus livery, made his fourth start in St. Petersburg today.  Viso, who started 21st got as high as ninth after the first yellow flag, but shortly thereafter he suffered a puncture and by the time he rejoined the race he was five laps down.  Showing determination and toughness, Viso continued to compete earning valuable championship points.  This track has been both kind and cruel to Viso.  He earned his career best road/street course finish, fourth, here in 2008, then last year he took the lead and looked to be a lock for the win before a mechanical problem hampered his efforts.

“It has been one of these weekends that we can forget,” said Viso.  “I need to thank my crew because it has been a pretty eventful few days.  I think we can go away knowing that we have learned a lot and this is what team work is about.  Its about supporting people.  At the start of the race I was running ninth, after starting 21st.  The car was feeling really strong and then I got a puncture on the right rear coming through the fast chicane.  It took time for the safety crew to get me back to the pits and then for my crew to get me back on track, so that put us five laps down.  Hopefully, we will have a better weekend at Barber.”

Next up for KVRT – Lotus is the Indy Grand Prix of Alabama presented by Legacy Credit Union, April 8-10, at Barber Motorsports Park in Birmingham, Alabama.  The race will be broadcast live on Versus beginning at 3:00 p.m. ET.