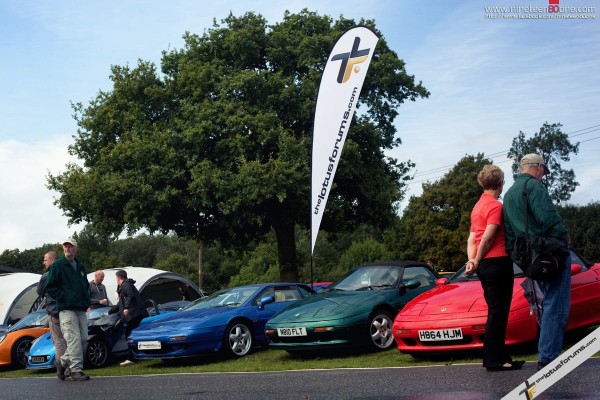 We’re just over a week away from the biggest Lotus event on the planet! With a full weekend planned and even a flyby by the amazing Red Arrows, there’s tonnes to see and do for all Lotus fans.

Racing over the weekend will entertain with Elise Trophy, Lotus Cup UK and Lotus Cup Europe on the timetable along with GT Cup, Monoposto racing, Production BMW Championship and the Trackday Trophy. We’re also celebrating the 40th Anniversary of the Esprit, 25th Anniversary of the Lotus Carlton and 20th Anniversary of the Elise with special displays and you’ll get a chance to see these great cars on track with parade laps on Saturday. All Lotus owners will also get a chance to take to the track on Sunday after 6pm for some exciting parade laps! We also have a few of the very special Evora GTE’s attending if you’ve not seen these up close before along with several Evora 400’s. On Sunday, we’ll see Lotus take to the track with their current and new products for demonstration laps and the factory will be in attendance all weekend with teams from the Lotus Cars, Lotus Motorsport and the Lotus Driving Academy. Lotus Aftersales are also on site with a Parts Sale if you’re looking for some Lotus bargains! For information on which traders will there, please click here.

All Lotus owners who make the journey to Brands Hatch and have ordered heavily discounted advance tickets (from here and still available) will be parking in special areas inside the circuit so wherever you look will be huge numbers of Lotus cars on display, we’re expecting in excess of 750 cars on show over the weekend.

With a record trade attendance, we have 8 Lotus dealers who will be attending with new and used cars for sale and there are independent parts suppliers travelling from across the UK and Europe to the event to showcase their latest and greatest products for you. We’ve also a large number of clubs for you to meet and chat to including The Lotus Forums, Lotus Cortina Register, Historic Lotus Register, Autobahn Stormers, Lotus Elan Central, East Anglian Lotus Club, Lotus Excel.net, Lotus Drivers Club, Lotus Seven Club, North Kent Lotus and VX220.org.

On track on Sunday we’ll have some excellent racing plus parade laps on the Indy and GP circuits from classic F1 cars, driven with enthusiasm for your entertainment! The recent Lotus Indycar racer will also be on static display on the TLF stand on Sunday if you’d like a chance to see this up close.