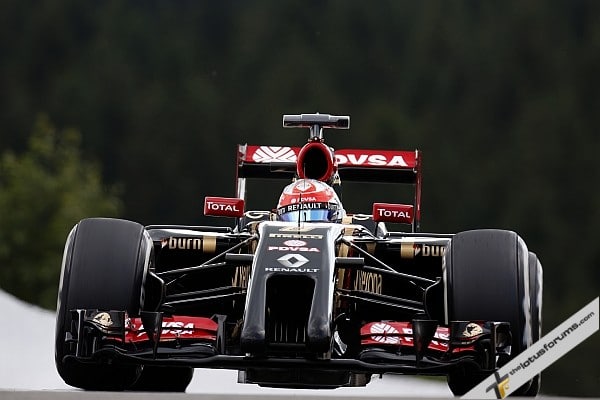 Pastor Maldonado and Romain Grosjean both suffered forced retirements from the Belgian Grand Prix at Spa-Francorchamps. Pastor parked his car early in the race with a suspected exhaust failure whilst Romain demonstrated promising race pace, however damage sustained to his car meant a precautionary retirement in the interest of safety late in the race.

Romain Grosjean, DNF, E22-03
“The car was pretty good; the pace was much better than expected, which is encouraging. Unfortunately the race was compromised early on, we had to change the nose on the first lap and we picked up some damage later on from debris on the track. We lost a lot of downforce as a result so we retired the car. We’re moving forward every weekend and learning a lot, though Monza is likely to be challenging too. Singapore should suit us a lot better.”

Pastor Maldonado, DNF, E22-04
“We were expecting a tough weekend – both here and Monza are challenging tracks for us – although the car seemed competitive and consistent today. It might have been possible to fight with Sauber and Force India during the race. Unfortunately I felt a big loss of power at the end of the first lap and saw in the mirrors that the engine was smoking a lot so we had to retire.”

Federico Gastaldi, Deputy Team Principal
“It was highly unfortunate that we had to retire both cars today. There is pace and the team is working extremely hard to extract every ounce of performance. We will regroup between now and Monza of course, and do everything we can to improve further. We’ll also keep looking for that pot of good luck.”

Alan Permane, Trackside Operations Director
“A tough race. Romain sustained damage at the first corner, which meant we had to change the front wing at the end of that lap. We opted for the prime tyres and he was actually running very strongly from then on, although obviously a long way back. Unfortunately, he picked up some damage after his final pit stop which made the car a real handful for him – he radioed in that the car was dangerous, so the only sensible thing to do was retire. Pastor suffered from what looks to be an exhaust failure early on in the race. We’re investigating both cars to understand what happened.”

Simon Rebreyend, Renault Sport F1 track support leader
“We knew Spa would be difficult but we fell short of our expectations this weekend. Pastor suffered an exhaust failure soon after the start, while the team had to retire Romain’s car due to a bodywork issue. We’ll look to Monza now and hope for better.”