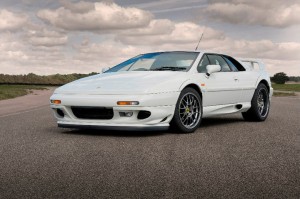 Lotus CEO Dany Bahar has taken delivery of possibly the most costly Esprit on the roads today. As a 2002MY Final Edition V8 this car is a 350bhp monster which has had a recent ground up restoration we estimate would cost in excess of £75,000 and a striking new paint job in pearlescent Ice White. We’re not sure if you’ll see the car cruising the streets of Norwich but if the CEO has an Esprit on his mind, why would that be?

The Mondial De L’Automobile is 17 days away, all the indications including this are pointing to Lotus unveiling the new Esprit – a car we’ve been waiting for eagerly since the demise of the last iteration of the Esprit in 2004. Little is known of the car, no spy shots have been taken as of yet nor has it been seen lapping the ‘Ring in sub 7 minutes however expect it to be the flagship vehicle of a new range of cars Bahar and his team have been working on since he took over in 2009.

We’ll be at the show and will be broadcasting the Lotus press conference live, be sure to keep an eye on the site on Thursday 30th at 16.45 CET.