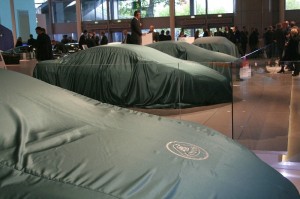 Lotus stole the show. Other car manufacturers were there with lots of electric/hybrid/green/eco-bubble cars as expected, Lamborghini had a stunning Sesto Elemento concept and Porsche, would you believe, had a new incarnation of the model range for the 911. Lotus had 5 new concept cars. One after the other, 5 new cars to show in Porte De Versailles!

Although the surprise was somewhat spoiled from images and video leaked onto the internet from the Louvre party the night before, celebrities Brian May, Naomi Campbell, Mickey Rourke, Garou and Steve Baldwin were involved in the unveiling of the cars from under their Lotus Racing Green silken covers. They were joined by Lotus Advisory Council member Tom Purves and Proton Chairman Dato Sri Nasmi amongst others. A star studded event but were the glitterati and VIPs upstaged by the new cars?

Before we mention the new cars, on display were the new upgraded versions of the current Lotus Evora. The Evora S features a supercharger to bring power up to 350ps and according to the Evora Platform Manager Nathan Hill really brings the car to life with superb linear power delivery and increased torque throughout the range. He also commented that the auto version of the car, the IPS (or ISP as CEO Bahar referred to the car mistakenly!) is very impressive with shift times comparable to double clutched boxes and auto-blip on downshifting. The Evora is still very much a car on the Lotus radar with strong worldwide sales and a very good number of the GT4/Cup cars now ordered or in customers hands. More plans for the Evora are afoot and the focus of the car will be to follow Chapman’s philosophy to shed weight and to see the car competing, as it already does successfully in the top levels of motorsport as well as enhancing the range of road cars available.

Lotus Esprit – Faster than Sound. Unveiled by Naomi Campbell and Brian May (awesome!) the Esprit looks set to be the flagship Lotus supercar. This iconic car was revealed in similar colours to Bahar’s personal Esprit and featured lashings of the latest technology. Finished with many carbon fibre details with carbon wheels, carbon brakes and many exterior carbon bodywork components such as splitter, diffuser and more the car looks to be good value at an estimated £110,000 especially seeing as it will feature a Lotus in-house KERS system (which alone added approx £200k to the Ferrari 599 concept in Geneva) and of course, will come as a hybrid if you want your supercar green. The car will use a version of the Lexus 5.0l V8 fettled inhouse at Hethel producing up to 620bhp and with a 3.4 second 0-60 sprint and top speed in excess of 205mph. With a 7 speed DCT gearbox the car is mid engined and driven from the rear and will begin production in late 2012 and be in a showroom near you from Spring 2013. TLF are looking forward to the delivery of the press car, that’s for sure!

Lotus Elan – No Excuses. The Elan concept was uncovered by Mickey Rourke and Datuk Syed Zainal, MD of Proton. Striking in yellow, the car from the front immediately looks like the younger sibling of the new Esprit. Referred to as ‘the beating heart’ of the Lotus lineup the car is fitted with a 4.0l V6 which is ‘pressure charged’ producing up to 450bhp. Again, rear wheel driver and mid-engined the car will follow closely in the footsteps of the Evora being a 2+0 or optional 2+2 and being lighter has almost exactly the same performance figures of the Esprit. It seems in straw polls that this Elan is coming first with onlookers from a looks/ownership perspective and with a £75k price tag comes in on a level slighty above the Evora S. Asked if this was the Evora replacement, Lotus staff seemed surprised at the notion and insisted that the car was a different offering for a different market and that the Evora, as stated above, was very much in the future of Lotus plans. Due in the 2nd half of 2013.

Lotus Elite. French Canadian singer Garou and Tom Purves (former CEO of Rolls Royce, now consulting for Lotus) were privileged to reveal the gentlemans car, the Elite. Using some of Lotus’s newest tech including the KERS again and a retractable hard top, like the Esprit the Elite will also have a hybrid option but being a larger and heavier car at 1,650kg it can’t quite keep up with it’s supercar cousin with a 0-60 of a still incredible 3.7 seconds from it’s 5.0l V8. Another 2+2 this car looks roomier in the back that the Evora and Elan and Lotus are quick to point out that this isn’t their first car with more than 2 seats stating 11% of all cars they’ve made are capable of carrying passengers in the rear. This car is fully detailed as it was revealed before the show here but expect it to enter production in Q1 2014 with an estimated £115,000 price tag.

Lotus Elise – Being the smallest car in the show, only Steve Bladwin was required to remove its wraps and show the world the new Elise. With it’s youthful, ‘street’ presentation depicting a graffiti car leaping from a wall to the road and real life this car is clearly aimed at the younger generation of Lotus owners. Expected pricing will be a very reasonable £35,000 the car is deescribed as the evolution of the 15 year old Elise and referred to as ‘sexy’ and ‘agile’ by Lotus. Being the lightest of the line up at under 1,100kgs (the 1996 Elise S1 was 725kgs) this car has a small 4 cylinder 2.0l ‘pressure charged’ engine producing over 300bhp. Scheduled for a 2015 entry to the range this car shown was clearly a design concept with lots of work to be done so although we’ve seen an outline of what the Elise will become you can assume that over the next 4/5 years the car will evolve as the range moves on. Worth noting that this is the only car that will come with a 6 speed manual gearbox as standard and the DCT will be optional.

Lotus Eterne – Proton Chairman Dato Sri Nasmi and the Malaysian Ambassador to France revealed the first ever 4 door pure Lotus notwithstanding the Cortina and Carlton. Clearly aimed at the Porscha Panamera, Aston Martin Rapide and Maserati Quattorporte market sector this massive Lotus (1,800kgs) hopes to top the market with performance figures and emissions. Due in 2015 and priced at £120,000 this car was another clear concept in the early stages of development being a clay model so we’ll wait to see how this enters the market in future years.

Lotus have been busy in the past 12 months since new CEO Dany Bahar took office. Many new hires from large and prestigious German and Italian car manufacturers, hundreds of millions to be spent and many words spoken and it’s boiled down to this. Have they delivered on their promises and will they continue to do so? These 5 cars seem certainly to move away from where Lotus have been for the last few years, perhaps the last few decades and they are heading to the stratosphere in terms of expected market placement. It’s clearly one thing displaying a number of concept cars but time will tell if the investment and traditional Lotus establishment combine to produce the world beating cars we were told about today and if they can occupy this space in the market along with Lamborghini, Ferrari, Maserati, Aston Martin and other premium manufacturers.

Judging from the initial media reactions to the cars, being involved in a huge scrum to get onto the stand and seeing a deep crowd vying for a view of the press conference Lotus have certainly revealed a solid hand and it’s grabbed the attention that they wanted. Online news is awash with Lotus, I’m sure every magazine cover for the next few days/weeks/months will feature a Lotus. With the previous talk they had to show all, they had to impress and they had to prove that they were serious and it looks like it’s worked.

What would Colin say? I think he’d approve. He moved the company upmarket many times, he always wanted to improve the brand and produce faster and better cars and looked to models such as the Esprit and Elite to do this. Chapman was an innovator, indeed he was a pioneer and these cars display both qualities. Well done to Lotus, make sure you follow through and produce these cars as good and high quality as you’ve said they will be.

Behind the Scenes Video