At 14:15 (PST) at the LA Auto Show, Lotus lifted the covers on the new range, revealing the cars to the US audience for the very first time – and oh boy did they do it in style. Hollywood legend Sharon Stone, musician and artist Paul Stanley from rock group Kiss, and Hollywood star William Baldwin were all in attendance to rip the silks off in true Hollywood style.

The cars are still the stars but only just! Only the stunning new Lotus Esprit could compete with the Hollywood actress Sharon Stone as she stepped forward to unveil the new incarnation of the iconic British super car. And who better to unveil the Esprit than the women who is responsible for one of its most iconic film roles in Basic Instinct. 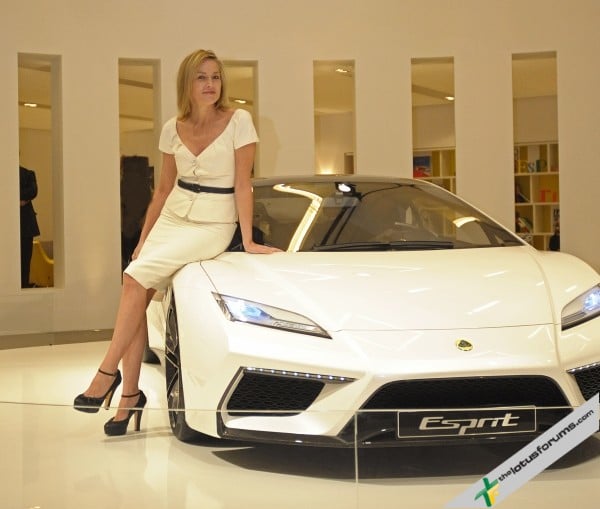 Commenting on the new range Sharon Stone said, “I think they’re very, very beautiful cars. When I sat in the Esprit, it reminded me of when we were filming Basic Instinct.…..driving through the hills in San Francisco, it was great. They’re really sexy, powerful, beautifully made cars.”

But as the saying goes, there’s no style without substance and the same could be said for our new range of cars. The iconic Esprit, uncompromising Elan, grown-up Elise, exclusive Elite and breath-taking Eterne are nothing if not cars of substance.

As Lotus CEO, Dany Bahar put it at the press conference, “Creating aesthetically pleasing cars is one thing, and Donato Coco has raised the bar across the range but even more important than this is what goes on beneath the skin of the car – here is where the real fun begins and where the Lotus legacy of exceptional ride and handling teamed with performance through lightweight steps into a new era. We’ve got the cars, we’ve got the people and we’ve got the backing. Our future starts right here.”

Dany Bahar added, “The American market is crucial to Lotus and as a British car manufacturer we would be crazy not to make the very most of this moment as we reveal our new plans to the US. What people see here today is a snapshot of the not too distant future for Lotus, but what I really want people to remember is that the Elise, Exige and Evora are available right now for people to buy – which other manufacturer can offer so much heritage and yet such a big taste of the future all in one package?”