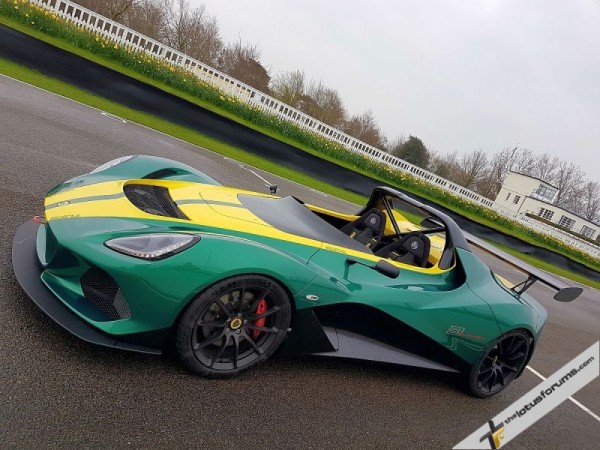 You know you’re in for a nerve-wracking day when you’re due to drive a sub-900kg, sub-3 second to 60mph car on a race track and it’s raining, a lot! TLF were invited down to Goodwood Motor Circuit by Bell & Colvill who have just taken delivery of the very first Lotus 3-Eleven to experience the quickest Lotus ever built on a full-on race track. Nerves were set aside as when our time came the sun began to shine and the track mostly dried so we could really get a feel for what this car can do without the added excitement of a slippery surface.

If you don’t know much about this car, it’s Lotus’s effective replacement to the 2-Eleven which was a real success story for the company; the 2-Eleven itself was the spiritual successor to the original Lotus Eleven of 1956, one of the prettiest Lotus cars ever built in my opinion.  The 3-Eleven continues the tradition of open-top circuit driving and dispenses with heavyweight accessories such as doors, roof and windscreen. Entry is made by climbing over the side of the car and settling into the carbon seat before strapping in with the standard 4-point harness.

Firstly, as the 3-Eleven likes a drink, we visited the local petrol station. Driving a 3-Eleven on the road isn’t as bad as you’d think as it’s well proportioned and easy to place on the road. The ride was not a GT car for sure, but if you’re used to a Lotus chassis it won’t come as any surprise how it feels and is more than ok for heading to local tracks. I’m not sure I’d commit to a drive to a continental track in the car but would imagine that most people looking to add one of these to their collection will be trailering it, even more so for the track focussed version. The lack of roof and screen combined with no heater or AC would make the car hard work on a long drive unless you were very, very committed!

Back at Goodwood we were joined by B&C’s tame racing driver David Pittard. David would be on hand to give advice on how to extract the maximum performance from the 3-Eleven and I was very grateful for this. David’s instruction led to pushing both myself and the car harder than I would have otherwise; not being used to driving a car with very effective aero (150kgs at 150mph) and such power. First impressions were obviously the monstrous acceleration which is inevitable with 410bhp and such light weight. After the first few laps to get a feel for the car, the track conditions and to put some heat into the tyres we began to explore more of the performance envelope and increase the speeds through the corners. As you gather more speed, the sharpness of the turn-in becomes very noticeable with not an ounce of understeer around the track on both the fast and slower corners with masses of communication from the front end and small adjustments very direct to make. With the car being fitted with variable traction control, you can come on the power very, very early in the corner and be accelerating hard through the apexes with little to fear, leading to much higher corner exit speeds. Around this time, my astonishment led to me offering David the odd ‘Wow!’ through the intercom which I’m sure he enjoyed. With so many lateral G’s which I’d never experienced before I found my position in the car would change slightly, even harnessed in and this took some getting used to. Once you have acclimatised to this though you could load the car up more and more which meant faster and faster around the track! My comfort zone with performance driving had been re-aligned with a car which seemed to grip no matter how hard you leaned on it and with more time the amount of progress that you could make with your driving would be easily measurable as it would be so noticeable. Another sensation I’d not experienced for a while was helmet lift which seemed to happen over 120mph; disconcerting the first time, it soon became ignored and normal, not detracting from the driving in the same way being as moved around the car by the sheer force of the cornering ability is soon second nature.

After 15 laps and half a tank of fuel (I mentioned it likes a drink!) it was David’s turn to ferry me around Goodwood as only an experienced, confident and talented racer could. When you’re driving, you think you’re fast; pushing the boundaries and getting as much as you can from the 3-Eleven. That’s all turned on its head when someone who can really drive takes to the wheel shows you what the car can actually do. This is as close as I’ll get to being in a full on race car, and in fact looking at the times the 3-Eleven is setting it’s quite a lot quicker than many race cars, we are in all seriousness talking LMP speeds here. You can enjoy my laps on the video below then towards the end David, plus some bonus on road footage! Please note that we were shifting at 5k as the engine was being run in still, there’s a lot more to be had from this car.

The 3-Eleven is a hugely fast car on track, it’s quicker than many cars that cost many, many times as much but along with that it’s very much confidence inspiring due to its sheer ability.  It is a car you can really push hard and will make you rethink what a car can do in your hands on track.

Huge thanks must go to Jamie, Miguel and the team and Bell & Colvill (01483 281000) for giving us the chance to be amongst the very first to drive the 3-Eleven and to David Pittard for his assistance on the day. This car is now back at the B&C showroom and available for inspection and test drives. With half of the 311 3-Elevens being built already allocated to customers (initial deliveries are expected in June) you had better get in quick if you would like to place an order! 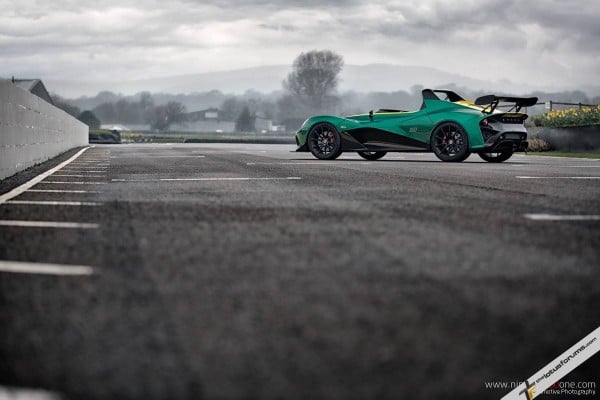 [VIDEO] Lotus 3-Eleven at the ‘Ring