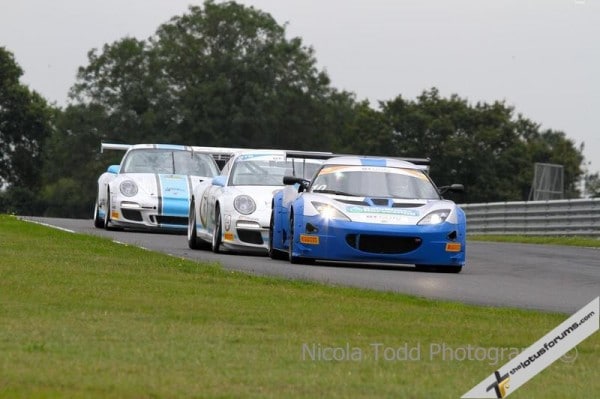 The weekend of the 19th and 20th of July saw the return to the track of the Rainwater Harvesting Evora at Snetterton, Norfolk. A five week break in the GT Cup Championship calendar gave the teams and drivers a chance to re-gather their efforts for the second half of the season. For the Evora, a return to Lotus Motorsport at the factory in Hethal for a mid season re-fresh meant the car would be in the best shape possible for the rest of the season. Car owner and driver Adrian Lester explains, “We are very happy with the performance of the car and we know we have a great package, so we don’t need to change anything too much. We’ve simply replaced a few of the parts that were coming to the end of their working life and had everything checked over. Everyone knows the car at the factory and they are keen to see it do well so that gives us great confidence going into a weekend, knowing the guys have put some great effort into the preparation.”

Although it was over a month since the pairing of Adrian Lester and his pro driver and coach, Andrew Bentley had driven the Evora, they were hopeful to pick up where they had left off all those weeks ago at Silverstone, where despite failing to finish the weekend’s races due to a suspension failure thanks to contact, they had set fastest times in their class and were looking to be in a good position to put in a strong result. “Silverstone was disappointing on one hand but on the other it hinted at the potential we have in the car and the driver pairing. We went into Silverstone with a healthy lead in our class in and an incredible 4th position in the overall Championship standings, sadly, this was not to last. Adrian had the strongest run of his season in qualifying and it was looking great for the race. Sadly, a hangover from some contact earlier caused the suspension to give up and the team, despite a big effort, were unable to fix it for the races.” Said Andrew

Arriving at Snetterton with plenty of energy the Rainwater Harvesting team quickly showed strong pace in testing and warm up, being able to put in lap times ahead of their fellow Class A competitors. A tough qualifying for Adrian flowed however, earning 7th in class after his best laps were thwarted by traffic. On review of the data, Andrew could see that Adrian was capable of a quicker lap, which was a great boost for the upcoming 1st race of the weekend, the 45 minute two driver battle.

Andrew was proved correct, with Adrian being able to lap some 2 seconds clear of his qualifying pace in the opening laps of the race. The Evora got stuck into a great battle with last year’s overall champion and current class points leader Jeff Wyat which lasted through to the 1st safety car period caused buy a car spinning and stopping out on track. At the same point, the pit lane opened for driver changes, with a flood of cars jumping at the chance to gain an advantage. Unfortunately, the Evora was unlucky to be caught out by the timing of the safety car and instantly went one lap down on the rest of the field. A superb stop and driver change by the team and the Evora was back out, this time with Andrew now in the car and pushing hard, setting fastest lap after fastest lap. Again, another safety car and more bad luck meant the unlucky team got stuck in a pack of cars, loosing even more time. “We got the worst possible end of the stick with both safety cars there. Through no fault of anyone’s, we got caught behind as it was released from the pits to neutralise the race and slow everyone down so the marshals could retrieve the stranded cars. It effectively ended our race, but we still managed to end up with a few championship points which are critical for the season as a whole.” Said Andrew. 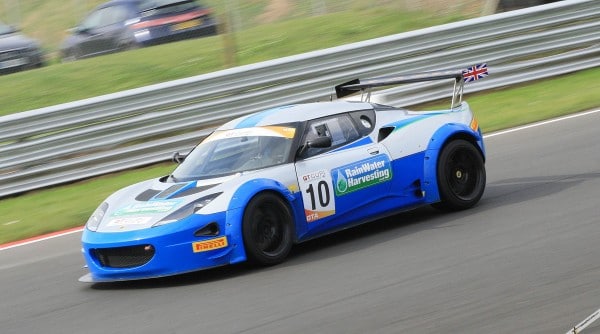 The second day of racing in the GT Cup weekend involves two ‘sprint’ races, each 25 minutes long. No driver changes in either of these so they are flat out duels to the flag. As has been the case in the previous rounds, Adrian drove in the first of these, round 11 of the championship, with Andrew taking the wheel for the second race later in the day, round 12.

Another strong performance in the qualification session for Adrian saw him setting his best times of the weekend, reporting the car feeling great on new rubber, this gave him a lot of confidence for the race. This confidence was well placed, coming away with a solid 5th in class after a fractured race due to safety car making an appearance yet again. Adrian reported after the race “I felt I could have actually gone a bit quicker and made up another place but, with the safety car periods as they were, it stopped our flow. The car’s been great this weekend and I’m looking forward to the next round at Silverstone already!”

Next up was Andrew, starting from grid 8 in Class A for the third and final race of the weekend. Andrew knew he had to play a tactical race as up ahead were the Class A cars he had to beat, but because of Adrian’s sterling efforts in the previous race, he had a number of more powerful cars behind. Andrew explains “Having cars in the higher classes around us at the start of a race, which are much quicker than us on a straight, makes it very difficult as they are able to blast past, but when we get to the braking and cornering, they often aren’t as quick as us. If you get caught behind a car in a section of bends it can really hold you up.” 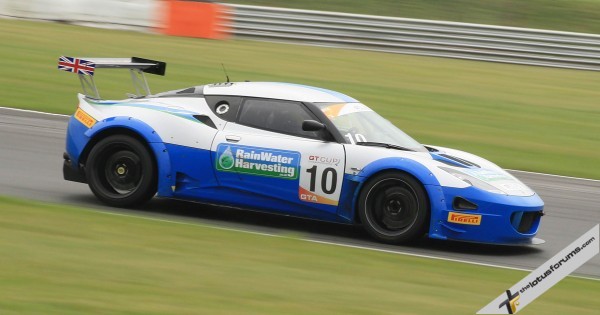 A steady start to the race may have signalled that little progress was to be made, but by lap two, Andrew started to pick off the competition, one by one. Quick work was made of Ben Tompkins in the Ginetta G50, with Harding next up in another G50. A move down the inside of the tight left of Agostini, gained another place. A battle with some faster Class B cars halted progress for a lap but once these were despatched with Andrew was able to chase down Peter Parsons in another Ginetta and Mark Short in his BMW M3. These two were having a great battle for the lead of Class A and Andrew was keen to join the party. A neat move down the inside at Oggie’s caught Parsons unaware, allowing Andrew into 2nd in class and some space to chase down Litherland in the quick M3. The BMW has the legs of everything on the straight but Andrew was able to make up ground in the brake zones and corners. This became evident when he pulled off a rare move around the outside of Agostini’s and into the lead of Class A. From there, he got his head down and won with a solid 12 second gap. Andrew said after the race “I knew I had to play this one smartly. We have the pace in the Evora over the lap, but the quicker cars around us made the opening lap tricky. I didn’t take any silly chances and bided my time. Picking the Class A cars off one by one took some planning but once I got past, I got my head down and was just working on setting fastest lap and being consistent. I have to thank Rainwater Harvesting, Adrian and the guys at Lotus Motorsport, they work so hard and wins like this are what we all do it for.”

The next round of the GT Cup will feature on the stunning Silverstone GP circuit on the weekend of 16th and 17th of August. Andrew, a senior instructor at Silverstone has a good bit of local knowledge which he is sure to use and Adrian has always shown well around the GP track. All in all, the Rainwater Harvesting team are looking for another strong performance.

Victory for Evora GTC in GT Cup at Brands Hatch